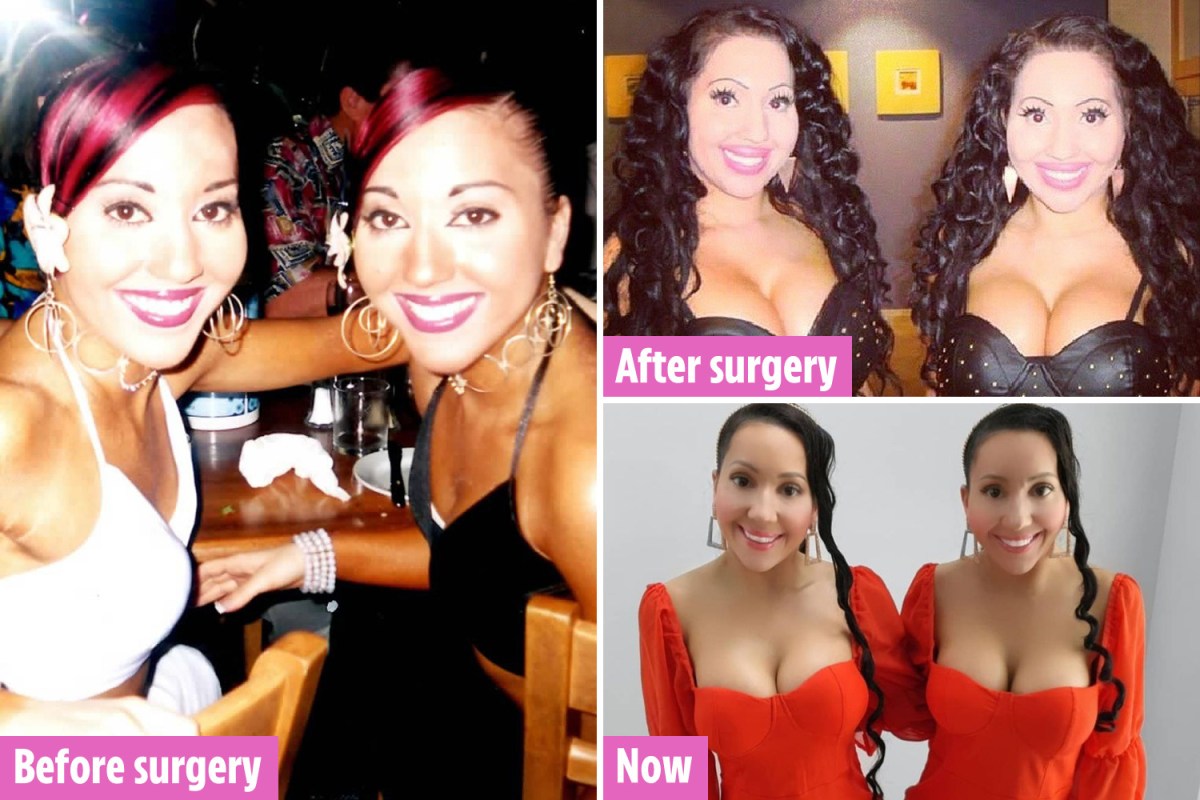 SISTERS Anna and Lucy DeCinque have gone to extreme lengths to become the “world’s most identical twins” and their extensive beauty regime is proof.

The twins, from Perth, Australia do everything as a duo, including cosmetic enhancements and pricey facial treatments – and they even share a boyfriend, Ben, and sleep in one big bed together.

The pair aren’t afraid to drop some serious cash on beauty procedures either, or put themselves through some pretty intense treatments for the sake of looking good.

The sisters, aged 35, have blown roughly £195,000 getting the exact same enhancements in a bid to beat the ageing process at exactly the same pace.

This includes matching boob jobs, treating themselves to a set of double DDs – which they later admitted to hating before dropping an extra £23k to go bigger.

They’ve also had a range of dental treatments, lip fillers and even eyebrow tattoos – but in 2018 revealed a much more “natural” look after trolling took a toll.

The pair said they were embarrassed by their old, fake look so toned it down, ditching their ultra-thin eyebrows and stopped getting their lips tattooed.

It was there they claimed Lucy “died for a minute” while undergoing cryotherapy last year, which uses freezing or near freezing temperatures to restore and tighten the skin.

It was the second time they’d tried the anti-aging treatment, but, unlike the first time, things didn’t go so smoothly.

“I’ve never gotten over this,” Anna said at the time. “I remember seeing Lucy on the floor, unconscious.”

“She had no oxygen in the chamber, “Anna explained. “She wasn’t breathing. She wouldn’t wake up. I don’t know if I blacked out.”

In a recent clip, the girls’ detailed their more day-to-day upkeep – including a high frequency facial which is “one of our favourite treatments.”

“We mention this all the time,” one of the girls said. “It’s one of our favourite treatments”.

They explained: “It’s an old fashioned treatment which dries up the pimples, blemishes and its also anti-aging – great for fine lines and wrinkles.”

Dermablading is a cosmetic procedure that removes the top layers of your skin – and the girls treat themselves to it often.

“It takes fluffy hairs away on the face,” they explained, saying “it’s a nice pick me up.”

The twins also get IPL skin rejuvenation and say it’s “good for collagen, plumping and pigmentation” which help maintains their youthful visage.

Treatments and procedures aside, though, the pair love getting dolled up and pride themselves on their fashionable appearance.

They don’t shy away from bright, bold outfits but say how you do your make-up is key.

“Tip of the week, if you want to match your lippy with your dress, don’t over do your eyes, because you don’t want to do too much,” they said.

March 12: The key to success is staying true to your dreams, not someone else’s

Want to know more about the girls? Read how they’ve both had the same cosmetic surgery, share a job and refuse to be separated – even for ONE HOUR.

And for more on their relationship, read how they take it in turns to have sex with their shared boyfriend in the SAME bed.