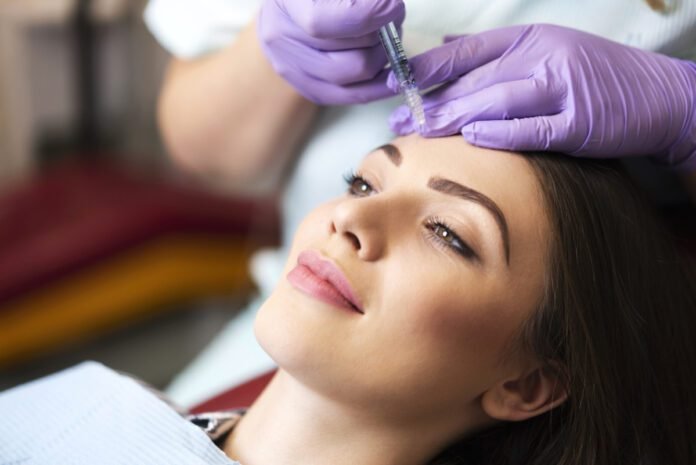 Frown lines got you frowning even more? If you’ve ever thought, “I need a little something right there” when you’ve studied your face in the mirror, but you don’t know exactly what the “something” should be, here’s what you need to know about the difference between botox and fillers.

One issue that comes up often: people want to improve their appearance, but they’re not entirely sure the best way to achieve that goal. They might ask for fillers, but their physician might recommend Botox instead, or vice versa. That’s because they don’t fully understand when (or where) Botox is appropriate and when it’s not. Same for fillers.

“They know the problem they want to correct, but they ask for the wrong thing,” is how Dr. Stephen Hess, MD, medical director of Center City Dermatology, puts it.

Here’s a quick-and-easy way to keep Botox (or botulinum toxin) and fillers straight: divide the face in half. Botox is typically used in the upper part of the face, while fillers are usually injected into the lower part of the face. Of course, that can and does vary, but generally speaking, that’s the approach that most experts take with these products.

Related: Botox Is an Effective Treatment for Migraines—but Is It Safe? Doctors Weigh In

What’s the difference between Botox and fillers?

Botox and fillers can both help you improve the appearance of your skin, but they’re very different products. Here’s how each product is typically used.

Products containing the botulinum toxin known as onobotulinumtoxinA are incredibly popular for temporarily smoothing out wrinkles and lines that occur from frowning, smiling, squinting and just generally using your face. Why? Because they work. In fact, the American Board of Cosmetic Surgery reports that neurotoxin treatments are the most popular cosmetic procedure in the U.S.

Related: Everything You Need to Know About Retinol Alternatives

Technically, these products temporarily paralyze the muscles under your skin by blocking signals so they can’t contract. When you can’t move those muscles, the skin on top doesn’t wrinkle. (Neurotoxins are also used to treat a variety of other conditions, including chronic migraine, lazy eye, excessive sweating, and bladder dysfunction, according to the Mayo Clinic.)

“If it’s injected properly, it basically weakens the muscles and you don’t have as many lines,” explains dermatologist Rebecca Baxt, MD, MBA, medical director of Baxt Cosmedical in New Jersey.

If you’re looking to smooth out those crow’s feet or the “11s” between your eyebrows, Botox isn’t your only option, either. While Botox was the first brand of neurotoxin to hit the market, other FDA-approved products include Dysport, Jeuveau, and Xeomin.

You can expect to need a new set of injections about every three to four months if you want to maintain the results, Dr. Baxt notes. As for cost, according to the American Society of Plastic Surgeons, the average cost of a Botox session is $466, according to 2020 stats. Insurance typically won’t cover Botox for cosmetic reasons, but if you need it for a physical reason, it will.

Fillers are just what you might imagine: a substance that fills in an area where you’ve lost some volume, an unfortunate phenomenon that tends to occur as you age.

According to the American Society of Plastic Surgeons, fillers can be used for a variety of concerns, including enhancing thin lips and shallow contours of the face, improving the appearance of some scars, and softening wrinkles and creases.

The American Society of Plastic Surgeons reports that the most commonly used types of filler are:

Fillers do last longer than botulinum toxin injections as a general rule. Some last about six months, but others can last two years or even longer in the case of a PMMA filler like Bellafill, which is approved for use up to five years. As for cost, The American Society of Plastic Surgeons reports that fillers vary widely in cost, depending on what kind you get. But according to 2020 statistics from the ASPS, a hyaluronic filler averaged $684. The ASPS notes that health insurance usually does not cover fillers. Source:

Related: From Joint Health Supporters to Energy Boosters, Here Are the 10 Best Anti-Aging Supplements on the Market

How to choose between Botox and fillers

So, which one’s better: Botox or fillers?

The answer is whichever product that’s appropriate for your needs and will address your concerns without causing any adverse or unintended results. For example, you don’t want to use Botox around your mouth, because it might seep into the muscles and cause your lips to droop, for example, cautions plastic surgeon Dr. Alan Matarasso, MD, the immediate past president of the American Society of Plastic Surgeons.

Usually, it’s one or the other. But occasionally, it might not be. Debra Jaliman, MD, a dermatologist and assistant professor of dermatology at the Icahn School of Medicine at Mount Sinai, says she typically treats crow’s feet with Botox, but she treats smile lines with filler. But sometimes, she will very strategically use both Botox and filler in a particular area, as do some other providers.

“With a strong frown muscle, I use Botox first,” she explains. “Two weeks later, after it works, if there is still a hint of a line, I add filler.”

Ultimately, your physician should guide you toward choosing the right products to address your concerns about your appearance. And don’t be afraid to ask, if you don’t understand why your doctor is recommending one treatment–or steering you away from another. Also, one treatment might be right for you now, but your needs may change in the future. You might go with one choice now, only to select another option (or combination of options) in the future.

Next up: How Young Is Too Young for Botox?

Fifty injections in a 15-minute treatment and up to six sessions.. so would you brave the flab jab to lose your double chin?