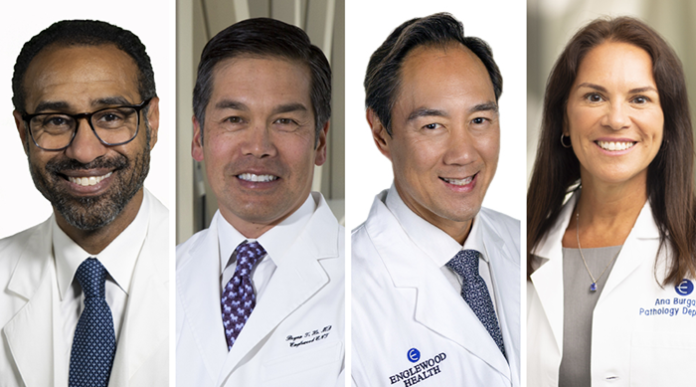 Drs. Troy Callahan, Bryan Ho and Kevin Yao will serve three-year terms as chiefs of their divisions, Englewood Health said in the announcement. They will fill the roles formerly served by Drs. David Abramson, David Henick and Marc Arginteanu, whose contributions “are numerous and impactful,” Englewood Health President and CEO Warren Geller said in a statement.

Callahan, the new chief of plastic surgery, is a board-certified plastic surgeon and specializes in reconstructive and cosmetic surgical procedures, including breast reconstruction and hand surgery; trauma and burn recovery; and plastic and reconstructive microsurgery. He received his M.D. from the Icahn School of Medicine at Mount Sinai in Manhattan, followed by a general surgery residency at Maimonides Medical Center in Brooklyn and a post-doctorate fellowship at the University of California in San Francisco. Callahan completed his plastic surgery training at Nassau University Medical Center in East Meadow, Long Island. He went on to obtain additional fellowship training with the Long Island Plastic Surgical Group.

Ho, the new chief of otolaryngology, is a board-certified otolaryngologist, as well as a head and neck surgeon. His clinical expertise includes image-guided endoscopic sinus surgery, thyroid surgery and parathyroid surgery. Ho received his M.D. from the Icahn School of Medicine, followed by an otolaryngology/head and neck surgery residency at Mount Sinai Medical Center. He has served as a clinical instructor at both Harvard Medical School and the Icahn School of Medicine at Mount Sinai and has mentored medical students and residents during their clinical rotations at Englewood Health.

Ho also serves on the board of the Foundation of Photo/Art in Hospitals. Ho follows Henick, who led the department as chief for 10 years.

Yao, who is continuing his 2021 appointment as chief of neurosurgery, is board certified in neurological surgery. His clinical expertise includes complex brain and spine surgery to remove tumors; spinal surgery for herniated discs and stenosis; endoscopic pituitary surgery; and radiosurgery. Yao received his M.D. from Columbia University College of Physicians and Surgeons, followed by a neurosurgery residency at Mount Sinai Medical Center and a neurosurgical oncology fellowship at the University of Texas MD Anderson Cancer Center in Houston.

Burga was elected president of Englewood Health’s medical staff. In this post, she leads the team of more than 1,150 physicians and other providers. The medical staff executive board is responsible for medical staff governance; physician credentialing and privileging; and quality assessment and improvement.