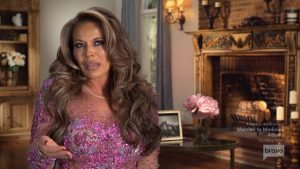 Some people in the public eye just expect us not to notice when their faces or bodies look suddenly different. They don’t address  why their appearance has changed. Some credit their slimmed down figures to working out and “drinking lots of water” or a good makeup artist.

Then, there’s Real Housewives of New Jersey star Dolores Catania. She is very open and very honest when it comes to her plastic surgeries and other cosmetic procedures. The RHONJ Season 11 premiere included an argument between Dolores and her boyfriend David Principe. She didn’t tell him she was going in for some plastic surgery in another state until the night before. He was upset about her undergoing an elective surgery during the pandemic. However, she just did what she wanted and explained that she didn’t feel bad since David wouldn’t give her the commitment (engagement) that she wanted. While I think Dolores looks amazing, she’s not done with the surgeries (which is totally none of my business, for the record). In fact, she has her sights on a unique procedure that I’ve never heard of before.

During an interview with New Beauty, Dolores was asked if there were any surprises she encountered during the healing process for her latest surgery. In response, she said, “I’m no stranger to plastic surgery. I’ve had lipo, I had a breast augmentation, I had a Brazilian butt lift, and, like I told you, I had a facelift.”

After that, she advised, “But, with a tummy tuck, you have to be patient. There’s no going home and walking around after a tummy tuck—you have to take the time to recover and rest.”

RELATED: Leah McSweeney Slams Dolores Catania’s Man David Principe For Objecting To Her Plastic Surgery; Says “You Are Lucky Dolores Even Looks At You” And Dolores Is “The Hottest”

“Are there any other cosmetic surgeries you’re thinking about getting done,” Dolores was asked. And that’s when she revealed, “Oh, yes, I’m considering getting a thigh lift.” I had no idea that was even a thing. Dolores didn’t elaborate on it any further. But, perhaps that’s something she will talk about during Season 12 or on this season’s reunion episodes.

TELL US- WHAT DO YOU THINK ABOUT DOLORES BEING SO OPEN ABOUT PLASTIC SURGERY? HAVE YOU EVER HEARD ABOUT SOMEONE GETTING A THIGH LIFT?