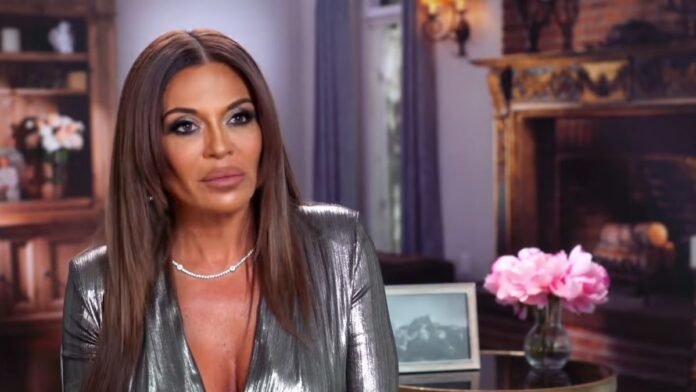 Dolores Catania has never been shy about going under the knife, but now it’s affecting her relationship.

The Real Housewives of New Jersey star has undergone quite a few plastic surgeries since she joined the show.

And Dolores has always copped up to the alterations she’s made to her body.

So far, the New Jersey Housewife has admitted to breast augmentation, a facelift, a Brazilian butt lift, liposuction, and tummy tuck surgery.

#MAFS Chris Williams recently posted on his Instagram account that his ex-fiancée Mercedes suffered a miscarriage in October of 2020. Read about the details, which link to his original IG post at our link in the bio.
(📸: Lifetime) …

(VOLUME ON) 🔪 #90dayfiance often lends itself to a horror film. So when I saw Stephanie murdering…

(VOLUME ON) 🔪 #90dayfiance often lends itself to a horror film. So when I saw Stephanie murdering a balloon, naturally I had to go there. This might become a feature film. For now, I hope you enjoy the trailer for “Sunday Bloody Sunday.” 🤣 Happy #90day Sunday all!!
(🎥: TLC / re-edited) …

(Volume on 🔊). Tonight on #90dayfiance Yara goes shopping for her wedding dress! But we switched up her partner because he is just that amazing at helping.
(🎥: TLC / re-edited) …

However, Dolores revealed that her boyfriend, Dr. David Principe, is not a fan of elective surgeries.

Dolores’ recent decision to go under the knife again didn’t sit too well with him.

The Real Housewives of New Jersey star was a guest on the Us Weekly podcast, Getting Real with the Housewives.

And during the chat, Dolores admitted that her latest surgery caused quite a bit of stress in her relationship.

But she admitted that despite David’s feelings about it, she wanted to do it.

“It’s not a matter of what I needed, it’s what I wanted,” noted Dolores. “And you know, turning 50 I’m not about what somebody else thinks I need in my life. I’ve been through enough. And I’m at the point now where no one’s gonna stop me from doing something.”

So what exactly did the RHONJ star have done this time around?

Well, she got a tummy tuck. And if you watched RHONJ, you would have realized that David had another reason to be mad at Dolores.

It turns out she didn’t even tell him she was going to do the surgery until the day before.

During her podcast chat, the Real Housewives of New Jersey star continued to dish on her relationship with David Principe and she admitted that her latest tummy tuck surgery caused stress between them.

“He really was angry. He was so mad at me and he didn’t let up on it,” noted Dolores.

She continued, “I let him be mad for a little while, and then I had to say, ‘Listen, you either live with it or we just have to move on.’

“But there has been some– I guess you wanna say– some stress fractures in the relationship.” added the RHONJ star.

As for whether or not the couple was able to mend things is still left to be seen.

Dolores did not reveal the current state of her relationship with David during the podcast but it may very well play out during Season 11 of the real Housewives of New Jersey.

Do you think David and Dolores will still be together by the end of the season?

The Real Housewives of New Jersey airs Wednesdays at 9/8c on Bravo.

Alicea has an obsession for reality TV and pop culture, and has contributed to various magazines, websites, blogs and books. She is also a certified… read more