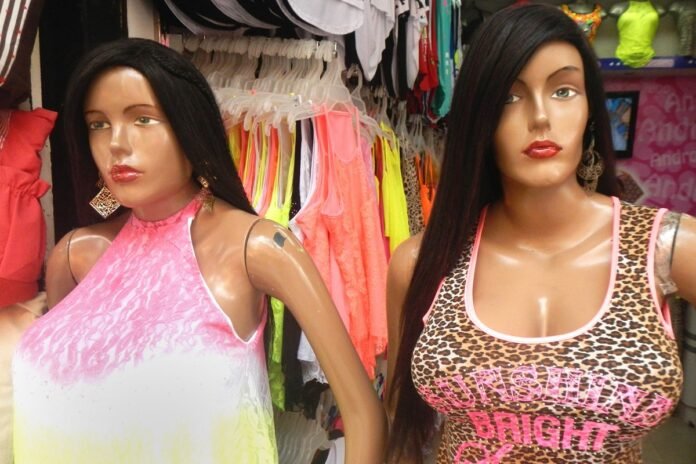 Cali, the state capital of Valle del Cauca, Colombia, is home to hundreds of plastic surgeons. More people travel to Colombia for operations than anywhere else in the world, the majority of them heading to Cali, and with annual profits of millions of dollars the city has become known as Colombia’s ‘Silicone’ Valley. And it’s not just the foreigners keeping the industry going. Colombia ranks third in the world for the most number of surgeries per capita, and the women of Cali spend a sizable chunk of their income on treatments and procedures to alter and reshape their bodies.

The vast majority of women in Colombia – and especially in Cali, the third largest and the most racially-mixed city – have black or indigenous blood running through their veins. Despite this, the images of female beauty promoted on television programmes, commercials and throughout the pages of glossy magazines tend to be of tall, thin, fine-featured, light-skinned, blonde women. It is precisely this distance between real women and beauty ideals that allows the industry to reap millions of dollars each year by offering the opportunity for an extreme cultural makeover.

In Cali, almost all major hospitals offer plastic and cosmetic surgery, and many operations are covered by insurance. Cosmetic surgery is fashionable among young women for their quinceañera coming-out party, their parents gifting them larger butts or breasts or a new nose. Winning female participants of reality shows and beauty contests are often given prizes that include surgical procedures donated by the cosmetic surgery clinics that sponsor the shows. Famous actresses, celebrities, and influencers often broadcast their surgeries live on social media, attracting huge audiences. Model Andrea Valdiri offered her 7.3 million Instagram followers $20 tickets to watch her surgery. The ticket website crashed after receiving over 500,000 visits in the first 10 minutes.

“In Cali, top cosmetic surgeons are considered sculptors with scalpels, aesthetic masters whose specialised work can beautify a woman”

Cosmetic surgery, like magic products or religion, is consumed in the belief that it will help women find a husband, solve marital problems, cure depression or help get a higher-paying job. In the sex industry, cam girls and sex workers with surgically altered bodies earn more money, and can charge clients extra in the upscale brothels or as escorts.

On an international scale, Colombia promotes itself worldwide as a destination for medical tourism. In 2014, an estimated 41,000 foreigners visited the country for medical reasons, spending $216 million, thanks to the relatively low cost of procedures available. Breast augmentation can be had for around $4,000, while a combo package of liposculpture, breast lift and fatty gluteal graft can cost $7,000, both of which include two days in a hotel plus sightseeing around the city before and after recovering from surgery.

In Cali, the pharmaceutical and medical associations are currently working with the local government to brand the beauty industry Estética Cali and the city boasts over 50 cosmetic surgery clinics. With their extravagant, eye-catching design and architecture, these clinics are easily identifiable. Some display classical beauty salon style architecture with fancy lettering on their signs, while many newer ones look like pop-ups, with seductive, oversized façades made from flat, shiny surfaces.

Several cosmetic surgery clinics are named after top-shelf European artists, such as Picasso, Matisse, and Dali. In Cali, top cosmetic surgeons are considered sculptors with scalpels, aesthetic masters whose specialised work can beautify a woman, and who charge accordingly. Like the paintings by international master painters, the facades of the top clinics proudly display the signature of the local artist, in this case, the lead surgeon of the clinic.

It hasn’t always been this way. In the 1950s, when the first aesthetic procedures were being performed in Colombia, cosmetic surgery was considered a sin by the powerful Catholic Church, which meant few women dared try to improve on God’s work. During that time, however, Pope Pius XII gave a talk at an international medical congress in Rome where he said: “If the body is a receptacle of the soul, it is correct that the body tries to be as perfect as the soul itself,” which was taken by women in Cali as giving direct permission to enjoy the benefits of cosmetic surgery.

It was in the 1980s that the industry really took off, just as the Cali Cartel began raking in billions of tax-free dollars a year from sales of cocaine. Drug traffickers were a blessing for the industry as their wives and girlfriends became some of the biggest consumers of cosmetic surgery, with no price too high. Bosses from the Cali Cartel bankroll their women to become beauty queens or centerfolds, paying for narco-muñecas (narco-dolls) to enjoy all the bountiful wonders that cosmetic surgery can offer.

The exaggerated curves of these women’s bodies have not only given rise to the high concentration of cosmetic surgery clinics in Tequendama, a residential area where many of the powerful narcos have homes, but have also reshaped the fashion industry within the city. Traditionally mannequins have been designed to be hangers for exhibiting clothes and thus thin like models. In Cali, however, mannequins are endowed with huge breasts, reflecting one of the most prominent aspects of the city’s idealised image of a woman’s beauty and sensuality.

“Even when the surgery is successful and there is no medical fall-out afterwards, cosmetic surgery can leave deep emotional scars within a woman”

It’s not just silicone implants that are being stuffed into these women’s bodies. In 2020, 10 people from a drug trafficking gang known as “Los Cirujanos” (“The Surgeons”) were sent to jail after they were found to be surgically inserting breast and leg implants, which mimicked the silicone versions, filled with liquid cocaine into women. One Colombian woman was arrested at a European airport for the way her butt had become deformed after the long flight.

Women unable to afford costly surgery in fashionable clinics in Tequendama subject their bodies to extra risks. Besides the certified surgeons in the city, there are thousands of unlicensed, untrained doctors offering procedures. In one recent sting operation, four dozen plastic surgeons in Colombia were found using false degrees supposedly obtained in Brazil, Peru or Argentina. An estimated 20-30 per cent of plastic surgeries performed in Medellín, Colombia’s second largest city, are performed by doctors without cosmetic surgery training or performed in unauthorized clinics by non-medical personnel.

To keep costs affordable, these informal clinics, some of which are located in the garages of single family houses, use pirated products, such as breast implants imported illegally from China. The most common liquids injected into women’s butts are paraffin and silicone, but even cheaper liquids, such as baby, vegetable and car oils, are often used. Many of those who inject these chemicals into women’s bodies are not doctors, licensed or unlicensed, but rather housewives or neighbors looking to supplement their income.

Even when done in the most chic and expensive clinics, these procedures can be dangerous with complications such as lumps, skin thickening, hyper-pigmentation, vein and arterial malformations, inflammation and arthritis often become chronic, and the accumulation of these substances in the body over time can cause blood poisoning. Cheap materials increase risks of infection and disease, as well as the probability that the woman’s body rejects such foreign matter. Every week in Cali there are news stories of women losing their lives or body parts after botched surgery or injections with toxic chemicals. In Colombia, 14 women died during cosmetic surgical procedures in 2015, 30 in 2016, with by far most of these deaths in Cali, and most of these in garage clinics.

Even when the surgery is successful and there is no medical fall-out afterwards, cosmetic surgery can leave deep emotional scars within a woman. Many women who have had surgery become nervous about having their surgically-enlarged bodyparts being man-handled, and sex becomes complicated and potentially dangerous for women as implants are delicate and can explode when subjected to extreme physical activity or heat. Not only that, but body parts can tend to lose sensibility after surgery. Breast implants require slicing through delicate skin and destroying the capillaries that supply blood to the nipples, thus diminishing their sensitivity while at the same time increasing irritation.

Cosmetic surgery often alienates women from their own bodies, leaving them sexy but sexless, mere mannequins for men to ogle. The designer storefronts of cosmetic surgery clinics in Tequendama which allude to the promise of ideal beauty (or at least an ideal booty) are to architecture what the mannequins in Cali are to real women.