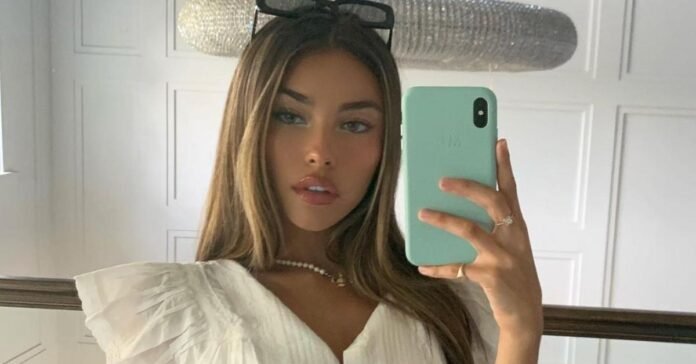 Something that celebrities are notoriously picked on for is for undergoing plastic surgery. Fans are always quick to assume that some stars have gone through medical procedures to alter their physical appearance.

And sometimes, they’re shockingly spot on with their presumptions! They do some hardcore detective work (aka Instagram stalking), where they compare past photos to recent ones to see physical changes.

One celeb that constantly gets called out for seemingly having had plastic surgery is Madison Beer. Madison has been under the spotlight since she was a young teen, so she has grown up in the public eye. So her overall look is bound to change as she is becoming an adult. It’s a natural process!

But some people out there still think she’s gotten some work done. Let’s find out whether that’s true or not…

Did Madison Beer get plastic surgery?

Recently, the singer has been criticized for not showcasing her “natural” face. At one point, many people were coming for her on TikTok for supporting cosmetic surgery.

The accusations intensified when TikTok user Katie Kelly (@girlwithgreenbeanie) made a video on the app saying that Madison is “consistently lying about her face and her body.” She also said that the musician sets “unrealistic body and face standards” for young women. See the video below.

Madison responded to the video. She didn’t confirm or deny that she had gotten plastic surgery, but she did say, “I’m not the beauty standard and NO ONE SHOULD BE.”

Soon after Kelly posted the TikTok and Madison vocalized her opinions on it, the musician went on live on her TikTok account speaking her truth. She talked about how she was done with the accusations and how she’s tried to uplift her fans who are insecure about how they look.

She also mentioned a doctor on TikTok who used a photo of her that was heavily edited to try and prove that she had gotten a nose job. Madison pointed out that she talked to the professional and claimed that she has never made changes to her nose; she said the photo was photoshopped.

Prior to this TikTok feud, she had appeared on TikTok Live where she admitted to never having been through plastic surgery. She’s been honest that she has gotten lip fillers before, but she also doesn’t count that as plastic surgery since it isn’t “permanent.” So, let’s finally put the whole “Madison Beer has gotten plastic surgery” narrative to rest, people!

Because of incidences like these, she has limited her TikTok use because she constantly gets hate from people on the app. She told The Face in August 2020 about a time a comment put her down.

“I saw a TikTok recently, and I don’t use TikTok anymore because it’s very hateful towards me,” she said. “I was saying I hate this mole on my face after I had seen a Twitter comment about it, and all the comments were: ‘I can’t believe she takes all these comments to heart, she’s so pathetic, she’s so insecure.’ I do take things people say about me very seriously, and maybe I shouldn’t, but it’s something I’m avidly working on.”

For the first time ever, Madison opened up about her diagnosis and her new album, Life Support, in the interview: “I did go through a breakup, but I didn’t want to make a breakup album because I felt like that was so shallow. That was only one part of a big story, the tip of the iceberg. I haven’t really opened up publicly about a lot of the stuff [I was going through], but I was diagnosed with borderline personality disorder,” she told the publication.

She went on to talk about how it’s been affecting her.

“I was suicidal at one point. I was going through a really tough time, and I felt like making a breakup album amidst going through such real s–t was dumbing myself down in a way that I didn’t want to do,” Madison said.

Once she found what was going on, she started going to therapy multiple times a week and she was able to become a more stable person. It was easier for her to get in touch with her emotions, which ultimately helped and better her songwriting.