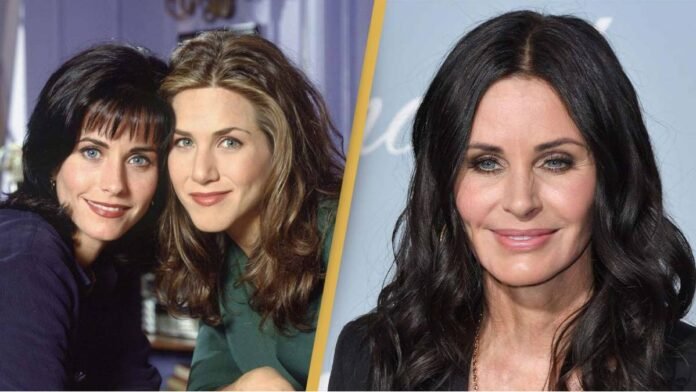 Courteney Cox has spoken about the pressures of ageing as a woman in the public eye, revealing she struggled to maintain what she perceived as her ‘youthfulness’ following the end of Friends.

Over the past decade, Cox has been the subject of considerable tabloid scrutiny over her appearance, having been open about her past experience using fillers and botox.

Now, with the star approaching her 60th birthday in a couple of years’ time, Cox has revealed how her attitude towards growing older has changed, and how since dissolving her fillers in 2017 she’s grown to embrace her natural looks.

‘There was a time when you go, ‘Oh, I’m changing. I’m looking older.’ And I tried to chase that [youthfulness] for years,’ Cox told the Sunday Times. ‘And I didn’t realise that, oh sh*t, I’m actually looking really strange with injections and doing stuff to my face that I would never do now.’

The Scream star revealed that it was actually comments from her own friends that made her realise she’d gone too far with her cosmetic procedures, saying, ‘People would talk about me, I think. But there was a period where I went, ‘I’ve got to stop. That’s just crazy.”

Cox also acknowledged the harsh attitude of the press and public towards famous women, especially as they grow older, saying, ‘The scrutiny is intense, but I don’t know if it could be more intense than what I put on myself.’

It’s not the first time Cox has spoken out about her relationship with her appearance over the years, with the actor having told New Beauty in 2017 that in Hollywood circles plastic surgery and other cosmetic procedures were normalised, especially among women. ‘You go to a doctor who would say, ‘You look great, but what would help is a little injection here or filler there,” she explained.

Following her decision to remove her fillers, Cox said, ‘I feel better because I look like myself,’ adding, ‘I think that I now look more like the person that I was.’

‘Things are going to change,’ she said, adding, ‘Everything’s going to drop. I was trying to make it not drop, but that made me look fake. You need movement in your face, especially if you have thin skin like I do. Those aren’t wrinkles – they’re smile lines. I’ve had to learn to embrace movement and realise that fillers are not my friend.’