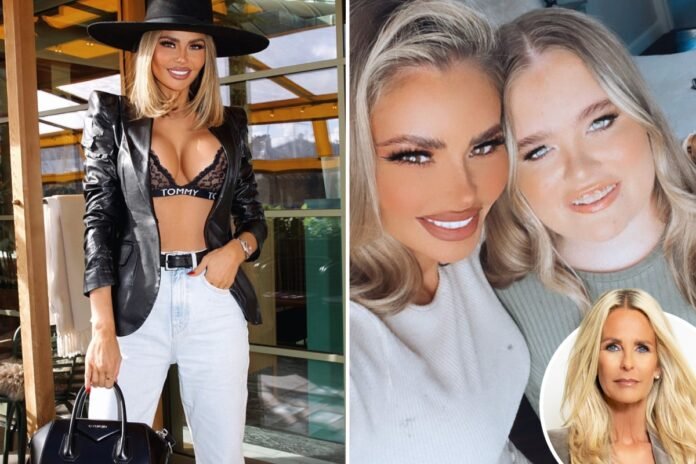 WHILE talking about the cosmetic procedures she has had done, Towie star Chloe Sims said her 16-year-old daughter Madison “doesn’t need to be aware of that”.

She even confesses to fibbing about the bruises on her face and tells her girl that they are “from falling over”.

I’m not here to criticise, merely to observe.

But her comments struck a worrying chord that resides deep in my parenting soul, and it’s that of ­dishonesty with our children.

The caveat with Chloe is that she has written about her daughter being diagnosed with ADHD and “a ­little bit of autism”, so it would be wrong of me to come down heavily on her.

But as a mother of four, I’ve always believed very firmly in being honest with my children — too honest sometimes.

I have one daughter who shouts at me and storms off when I overshare.

But that’s because the problem is with her obviously, and definitely not me.

However, reflecting on Chloe’s words, in so many situations in life I think it’s important to acknowledge that there isn’t always a happy ­ending.

And turning to more general aspects of life — whether that be ­questions of ­morality, what’s in the news or the huge impact of aesthetic procedures — I feel deeply troubled by parents who think nothing of not telling the truth to their children.

Granted, we all have a right to bring up our kids in the way we see fit.

As well as being a strict, liberal ­parent, honesty is at the top of my priorities.

This means I’m prepared to let my children know that the world is pretty horrible — people can be ghastly and that, as a mum, I am not flawless.
I do not hide my weaknesses — I explain them.

I want my children to live in reality, not a constructed one. It is of greater value for my kids to know ­dangerous things exist and mistakes can be made — but that you can learn from them.

Anything I discuss with them, I make age-appropriate.

It is baffling to hear Chloe say that her daughter does not need to know about what cosmetic procedures her mother has had.

By the time you are 16 you’ve learnt a fair few things about life. And she has a mum in the public eye.

With a cosmetically enhanced face and altered body like Chloe’s, there would have been a day when Mummy left the house with small boobs and came home with bigger ones.

There would have been a time when her lips and bum were of average size but then were suddenly much inflated.

Shielding your child from conversations about things that are ­physically life-changing is detrimental to both parent and child.

It induces a damaging level of ­mistrust, suspicion and doubt.

Sharing information with your child, making yourself vulnerable, being­ ­honest and risking being challenged can only serve to strengthen the relationship.

By not discussing alterations to her body, Chloe is pretending all women are blessed with near-perfect bodies. And we all know that ain’t true.

PEOPLE CAN BE GHASTLY

I presume she’s hoping her daughter will think “magic happens” and that this is something every woman has done.

Being truthful does not normalise these ­cosmetic procedures.

But it would mean explaining why she had it done.

In contrast, Danniella Westbrook — who has had a number of cosmetic procedures to repair damage from her drug addiction and to beautify herself — has chosen to tell her daughter Jodie about it.

She, in turn, doesn’t want to go down the same route.

These two daughters are part of a generation bombarded by images of perfection and alteration.

Denying one the opportunity of an honest conversation about it is plain wrong. It’s dangerous, ­foolish and naive.

And it begs the question: What are you scared of?

You should want your child to challenge you.

That’s how they build resilience and grasp a greater understanding of debate and develop empathy.

Chloe says she worries what her daughter might come across on social media and that she tells her she is beautiful every day.

That’s all well and good. But social media is the very fabric of life nowadays — especially when you’re 16 — so shielding her from what is real or fake is not ­protection. It’s rejection.

It’s rejecting the principles of parenting that require us to be frank, sincere and trustworthy.

GETTING OLDER IS A PAIN

THE man who once had the fastest feet in the world – and insured them for £25million – claims nowadays he would struggle to run for a bus.

Riverdance creator Michael Flatley says dancing has taken such a toll on his body that his neck and back are in a really bad way.

The 63-year-old, who apparently has torn muscles, ruptured tendons, a broken bone in one foot and needs his shoulders replacing, says you have to make a friend of pain in the dance business.

Doctors warned him but he never listened.

Well, Michael, it ain’t just in the dance business. We’re just getting old.

And with age comes stiffness and muscle loss.

I’ve endured arthritis in my hips from a very young age, so me and pain go back a long way.

I once was a gym bunny, I used to run and ride horses. Every consultant I met would plead with me to stop and try something gentler.

Now I enjoy Pilates, which is tough but less damaging.

I did try yoga a couple of times but all that mindfulness was a struggle. I couldn’t get my head around the meditation bit.

I’d lie there making shopping lists, stress about chores and deadlines and worry about problems that hadn’t even happened yet.

To that end, I’ve come to the conclusion that if you have time for mindfulness, the chances are you’re not the person who needs it.

I KNOW how lucky I am. I do not have to worry about how I’ll pay for my food.

And while I will frown at my energy bill, it will be manageable.

People have endured a cost-of- living squeeze, which has now become a crisis. And it’s more than a little unnerving.

I cannot imagine making a choice about whether my children go hungry or freeze in their home.

I think of the parents who make daily sacrifices to not eat so their offspring can.

My early childhood was blighted by a lack of food, and I had holes in the soles of my shoes. That was in the early Seventies.

How is it that in 2022 many people are enduring far worse? I understand life today is costly and more complicated.

There are more commercial pressures and people are burdened by expectation and unattainable aspirations.

There are people stuck in poverty traps, made to believe that they can work their way out of it.

More often or not they can’t, because the system doesn’t serve them well.

For the millions of people on benefits who fear they might not make it to the end of the week, the guilt must be overwhelming.

Maybe the only reason more ears are pricked now is because the middle classes are starting to feel the pinch.

I don’t know what the solution is but I feel shame that people up and down the ­country go hungry and cannot be clothed properly.

How did we get here?

More importantly, how do we narrow the gap between the uber-rich and acutely poor?

We all have a responsibility to do something before the gap widens even more.

ASH SERVES UP A LESSON FOR US ALL

I’ve had the greatest admiration for her sporting prowess but even more for her sense of humility.

She openly took a break from tennis due to mental health issues some years ago and now, at the height of her success, aged 25, admits “she’s spent” and plans to retire to “chase other dreams”.

Sportsmen and women are a peculiar breed.

They possess absolute dedication, focus and a narcissism which has always sat uncomfortably with someone like me, who has largely spent her life tending to other people’s needs.

But the admirable qualities that bring these people success are also the ones that make them unique and selfish.

So, I love the fact that Ash has the vision to see beyond a life in tennis.

To a life where she may take a back seat and not be the focus of everyone’s attention.

I have a good feeling this pocket-rocket is going to find greater happiness off the court than she ever did on it.