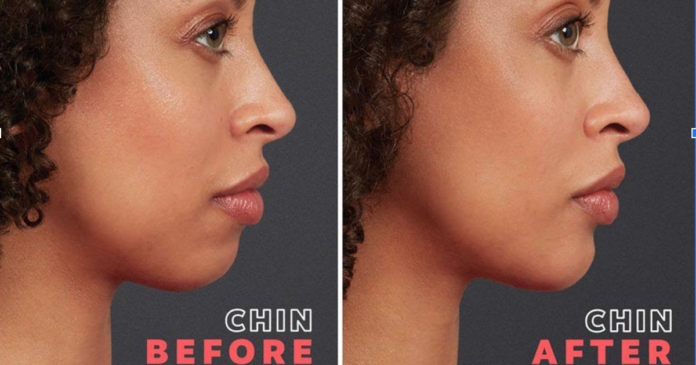 I feel like my chin is short but I don’t want surgery. Are there any other options for me besides a chin implant?

The chin is an extremely important part of facial balance and beauty. A weak chin in women makes the jaw look shorter and the neck look fuller. By adding projection to the chin, the jaw becomes longer and the fat pocket under the chin looks less prominent. In men, a strong chin is a sign of masculinity and leadership. In fact, a survey of Fortune 500 CEOs found that the majority had a strong chin.

The assessment of the chin is best done with a photo from the side. If a straight vertical line is drawn down from the front of the lower lip, the chin should project just to that line. Chins that are significantly behind the vertical line need to be augmented.  In women the augmentation should not quite reach the line, otherwise the chin looks too masculine. In men, it is OK to go beyond that line, but again, not too much. Otherwise the chin will look exaggerated.

The physician also needs to plan for the width of the new chin when viewed from the front. Women generally have a narrower, pointed chin that is the same width as the base of the nose.  Men tend to have a wider chin that extends further to the corners of the mouth.

Recently, the Allergan filler Voluma was approved by the FDA for chin augmentation. Voluma can be injected in the office without the need for surgery. It can be used to make the jaw longer and also can be used to help shape the chin itself. The product should last from 15-24 months. This injectable option can be repeated as needed. Filler can also be a good first step to see if the patient likes their new appearance before proceeding to surgery for a chin implant. If the patient doesn’t like the injectable look, the filler can be dissolved.

My recommendation would be that you visit a plastic surgeon who does both chin implants and filler injections. Let him take photos from the front and side and give you your options. Often, using injectables for chin augmentation is a great first step.