One in every 600 children in the world is born with cleft lip or palate, a facial deformity that can have lifelong consequences for young people who are born with it. A cleft palate or lip happens when a child’s face did not join together properly when the baby was still in the womb. It is present from a child’s birth and can affect one side of the face or both.

The condition is especially prevalent in Pakistan, where many families can’t afford surgeries for their children to correct therm. Of the approximately 10,000 children who are born with cleft lip in Pakistan every year only half of them get surgery early enough to address the problem. Numbers of children with this condition are higher in rural areas, but even fewer families there seek treatment for their children.

A team of doctors is working to change that by providing free surgeries for children born with cleft lip and palate. Among them is Dr Ulrike Lamle, a visiting surgeon who endeavors to rebuild the self-esteem and confidence of children through simple surgeries that correct their deformities and get them smiling again. 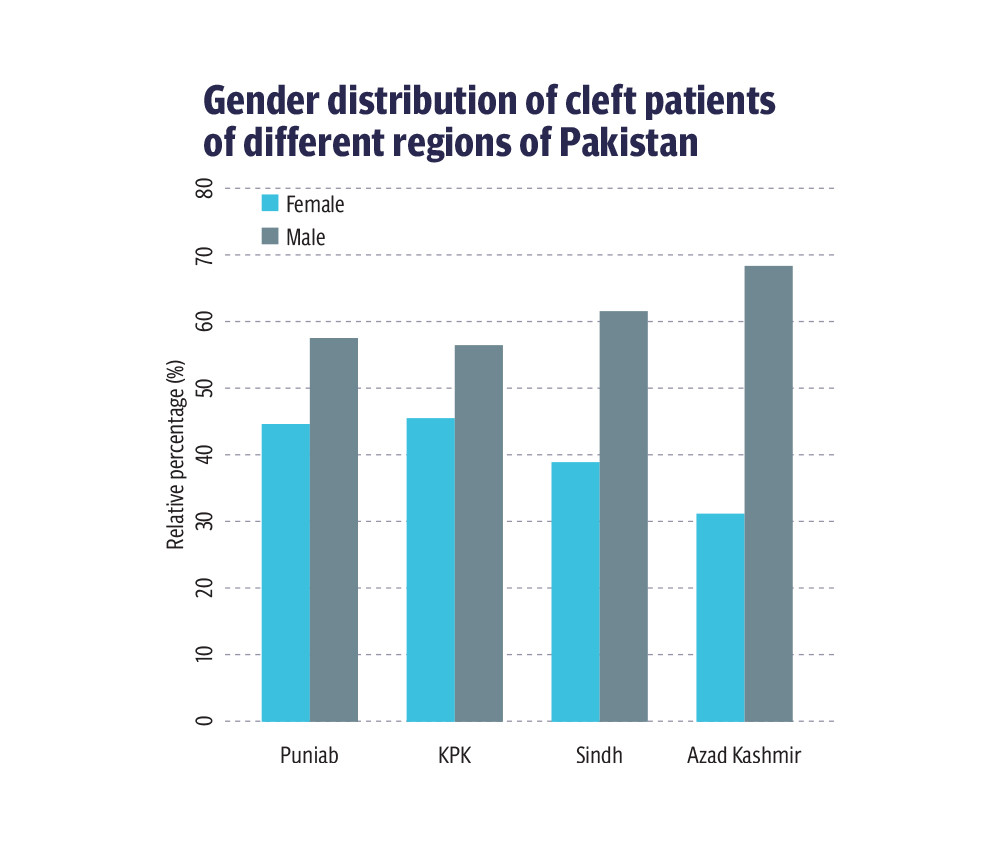 Dr Lamle’s journey started in South America in 2004 where she met a plastic surgeon who helped her understand how many people need cleft lip and palate surgery. She decided to start performing operations in Pakistan after attending a conference that showed her the extent of the problem there.

Eight years later, she works alongside plastic surgeon Dr Ashraf Ganatra, former head of the Department of Plastic Surgery at Dow University and Civil Hospital, on a project with the Al-Mustafa Welfare Trust. The project covers travel and accommodation for patients who couldn’t otherwise afford to get treatment, performing more than 1,000 cleft lip and palate surgeries every year.

It is currently operating in Sindh and Baluchistan, where surgeons work alongside social workers and local doctors to educated families about proper timing and aftercare for cleft lip and palate surgeries.

Although the effect of cleft lip and palate is mainly cosmetic, it can also cause emotional and self-esteem issues. Dr Ganatra said children with the condition can be discouraged from pursuing public-facing careers in fields like medicine, engineering, politics, and journalism where interactions with people are common.

Doctors most commonly see the condition among patients from lower income groups, which creates a need for low-cost and free options for surgery. After cleft lip and palate procedures, patients also need post-operation care which includes speech therapy and orthodontic work. 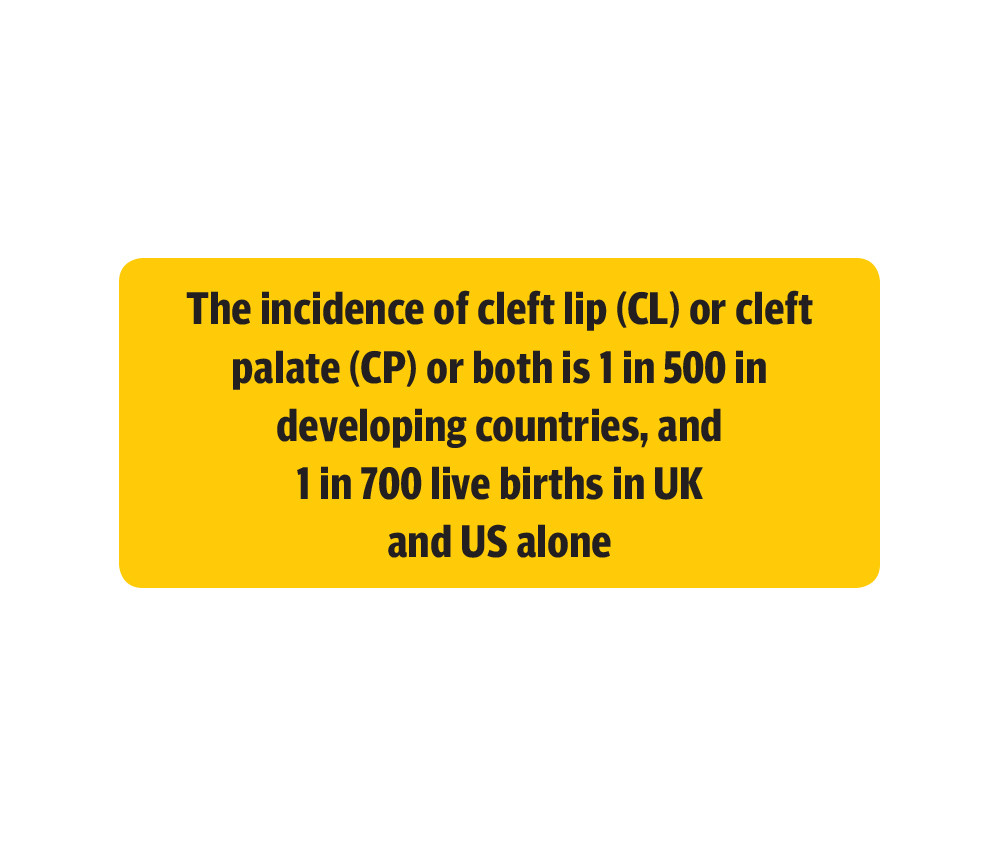 Dr Ganatra said folic acid deficiencies in the first three months of pregnancy can also lead to malformation in children. He said this is something a good sonologist can determine during an ultrasound, but doctors often don’t inform the parents if they spot such an inconsistency out of fear they will try to abort the child. Abortion is legal under certain conditions in Pakistan but highly frowned upon and difficult to get. Aborting a child because of a deformity is illegal.

Ganatra also said women in Pakistan often self-medicate early in pregnancy, which can create problems for the baby. He said the age of the parents can also increase the likelihood of a child being born with a deformity. He said alcohol consumption and smoking (more common than the former) are also contributing factors in Pakistan. “Even in rural Punjab we can see women smoking hookah,” he said. “Passive smoking is equally hazardous.”

Experts emphasize the need to promote awareness about the contributing factors of cleft lip and palate. They also encourage genetic tests to avoid potential malformation in children. Still, doctors sometimes come across cases where none of these factors were present and the child was still born with a facial deformity, making the condition even more difficult to prevent.

Prices for cleft lip and palate surgeries in private hospitals can be steep, Dr Ganatra said. “The biggest tertiary care hospital in Karachi is charging 2.5-3 lakh just for cleft lip, another 3.5-4 lakh for cleft palate, [and] around 5 lakh for bone grafting, lip closer can cost another 5-6 lakh.” Surgeries are often subsidized by nongovernmental organizations and other donors, who provide their services at a nominal rate. The Al-Mustafa Welfare Trust has put a cap of 1.5 lakh rupees for surgery costs.

While there are qualified surgeons in many Pakistani hospitals, these facilities are often backloaded with emergency surgeries, so cleft lip and palate procedures get delayed. Since most people who are affected by this condition can’t afford to pay for surgery, many private surgeons performing the operation don’t charge for their services. If they do, they charge a small amount to rent the operation room and provide anesthesia. Normally, a good surgeon can perform 8-10 surgeries per day, each surgery taking around one hour. Recovery time for the surgery is between 2-3 days. 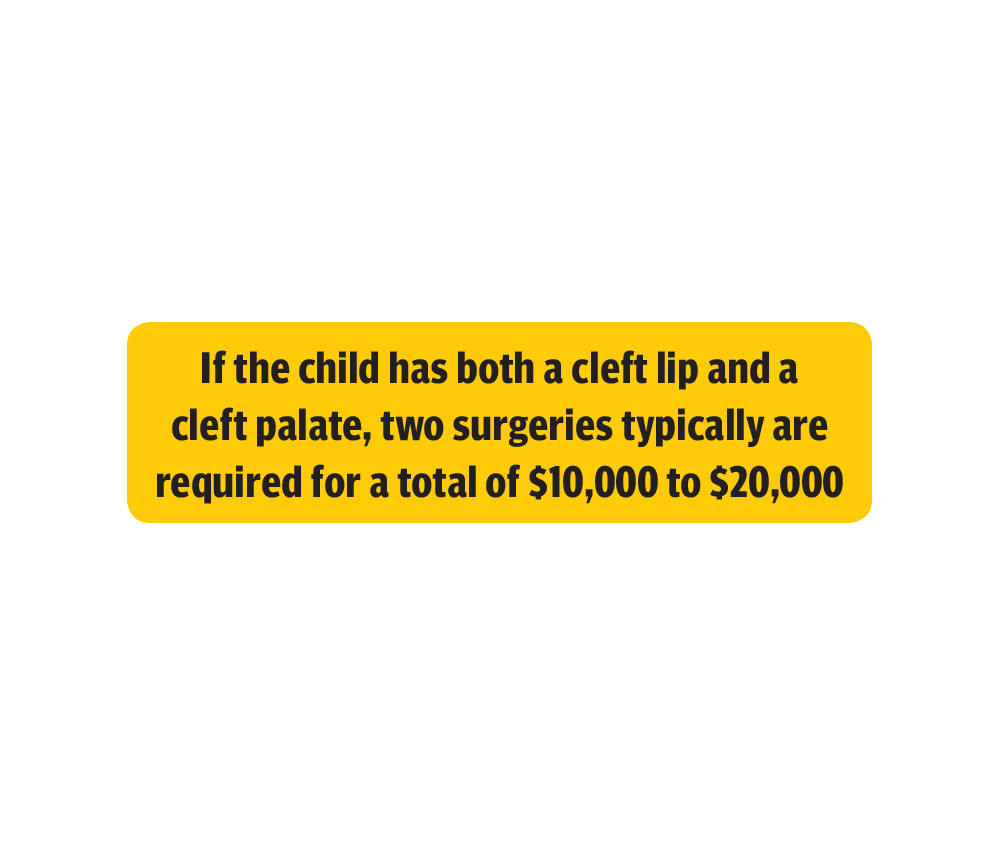 In most cases, the surgery only leaves a small scar which often goes away later in life. Dr Lamle said it’s important for surgeons to be well-trained to do the first surgery properly. If the surgery is not done the right way, she said it can create problems for the patient down the line. “In few cases. the lip or palate opens up if [the surgery is] not done properly or [the wound is] not taken care of.”

Aftercare is an important part of the procedure, but Ganatra said many people who are getting the surgery for free don’t realize what they need to do to keep their child from getting a later infection. Doctors instruct family members on how to clean the wound with soap and water to prevent complications due to poor hygiene. Challenges for children with cleft lip and palate don’t stop after surgery. They will continue to need care from pediatrician, speech-language therapist, pathologist, ENT, orthodontist, and social works.

It’s best for children to get the surgery done before they are 8-years old so they can learn to talk properly with the help of a speech therapist. After that, they can start to development a speech impediment because of a cleft palate. Surgeries for cleft lip can be done when the child is three months old, while palate surgery shouldn’t be done until the child is one. Factors doctors consider before performing the operation are the child’s hemoglobin level, weight, and health (the child should not have a chest-related infection during the operation). 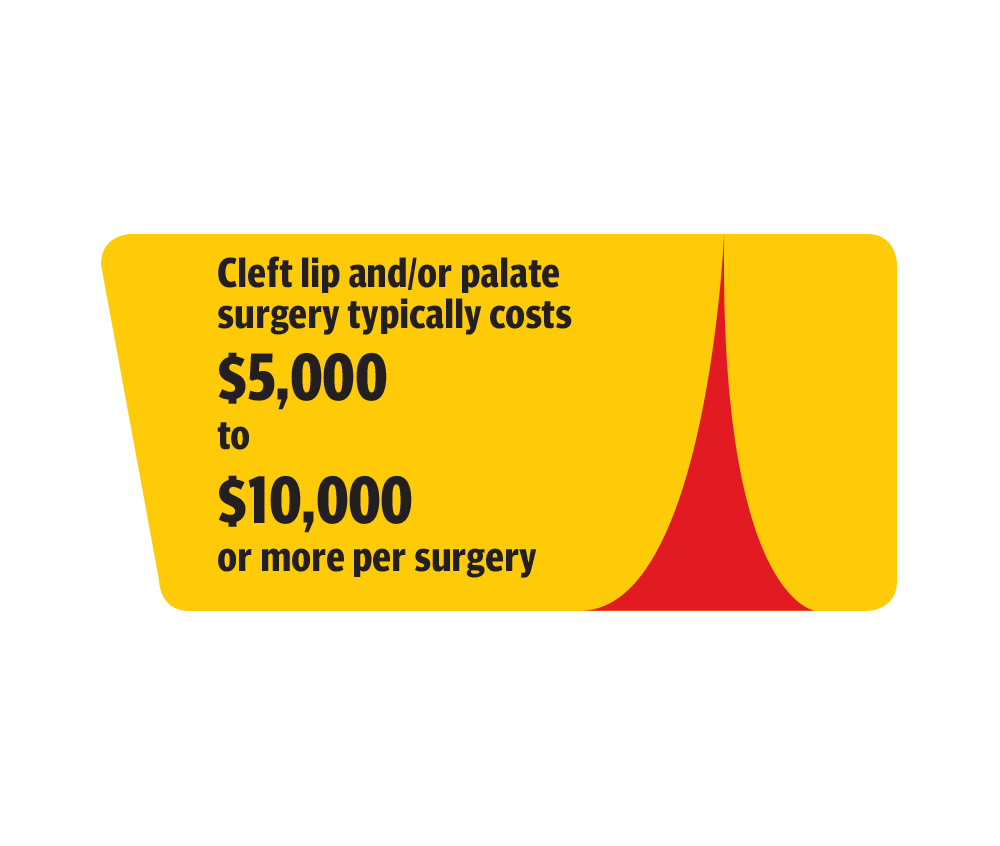 Because children can’t get the operation until they are three months old, they find it difficult to intake milk as infants. Doctors often must instruct mothers on how best to breastfeed their child with this condition.  “The child should be held like a horse-riding position and on 45 degrees to help him intake the milk and also there are special nipples available in the market for such children,” Dr Ganatra said, referring to a chart his team made to help mothers.

Most doctors who aren’t specialists don’t know the proper timing for surgeries and often suggest to parents that the procedure can be done for their child later in life, which can increase the chances that the child will have a long-term speech impediment. If parents wait to perform the surgery, it can be difficult to get their child back to talking normally.

Surgery for gums should be done for children between 8-9 years of age while nose surgery should happen when they are 18 or 19. After surgery, the child should be checked by a doctor every year until adulthood to make sure the deformity hasn’t returned.

In Pakistan, 15 per cent of cases of this facial deformity are cleft palate, 25 per cent are cleft lift, and in 60 per cent of cases, patients have both. The German Cleft Children’s Aid Society (DCKH) is helping train local surgeons in Pakistan to perform the operation. Dr Ganatra said the country currently has around 250 trained plastic surgeons who can perform the surgery – most of them are women. Dr Lamle believes increasing the number of trained professionals will ahelp spread awareness and educate people about the topic.

There are many myths about cleft lip and palate that need busting in Pakistan, where some people have far-out beliefs about its causes. Dr Ganatra said 90 per cent of the parents and elders he meets thinks the facial deformity was caused by the pregnant mother stepping outside during a lunar eclipse. He said this skewed understanding of the facts means a lot of people don’t look for ways to cure their children. In rural areas, he said communities blame women for these deformities, which can lead to violence against them.  “There have been cases where mothers are thrown out of the houses,” he said.

Dr Ganatra said the problem is engraved in the mind of the elders in rural areas who think that mothers are being affected by some sort of superpower. They also don’t understand that deficiencies can also be with the father if he has deficiencies in folic acid. No one is ready to have conversations about shared responsibility for men in this matter, which can even lead to divorce. “People believe in myths more than doctors and keep using homemade remedies sometimes which makes matters worse,” he said. 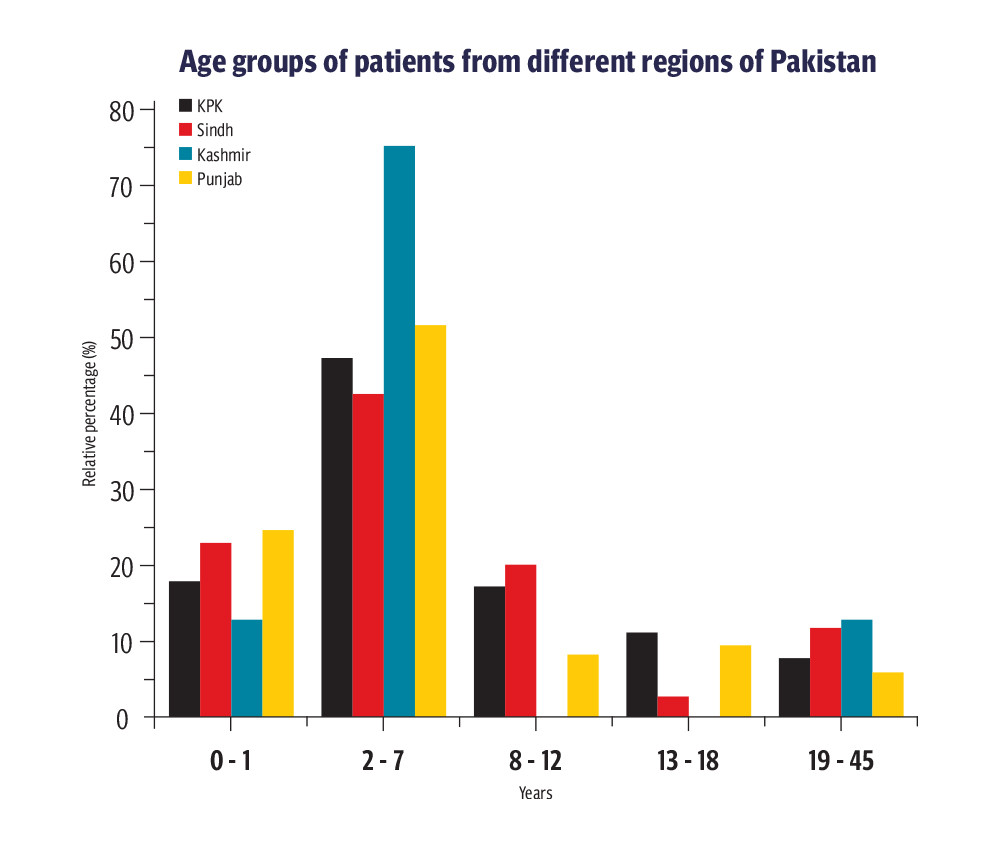 Due to the load at government hospitals, nongovernmental organizations play a big role in providing awareness and treatment for cleft lip and palate. Organizations visit rural areas and coordinate with local doctors and social workers throughout the year. “They have been working on teaching and making it easier for patients to have access to doctors,” Dr Lamle said. Training and capacity at state hospitals remains an issue for expanded care in Pakistan.

To spread facts about cleft palate and lip deformities, organizations like Al-Mustafa Welfare Trust make announcements through Masjid Imam and put up posters in rickshaws and on local transport to help people realize the importance of timely surgery. To keep in touch with the patients and keep a check on their progress, doctors create WhatsApp groups where they also provide online sessions for speech therapy and psychological help.

Dr Lamle has visited Pakistan four times over the past eight years, traveling to interior Sindh and remote areas in Balochistan. During her travels in Pakistan, she has met with many people whose stories have touched her. 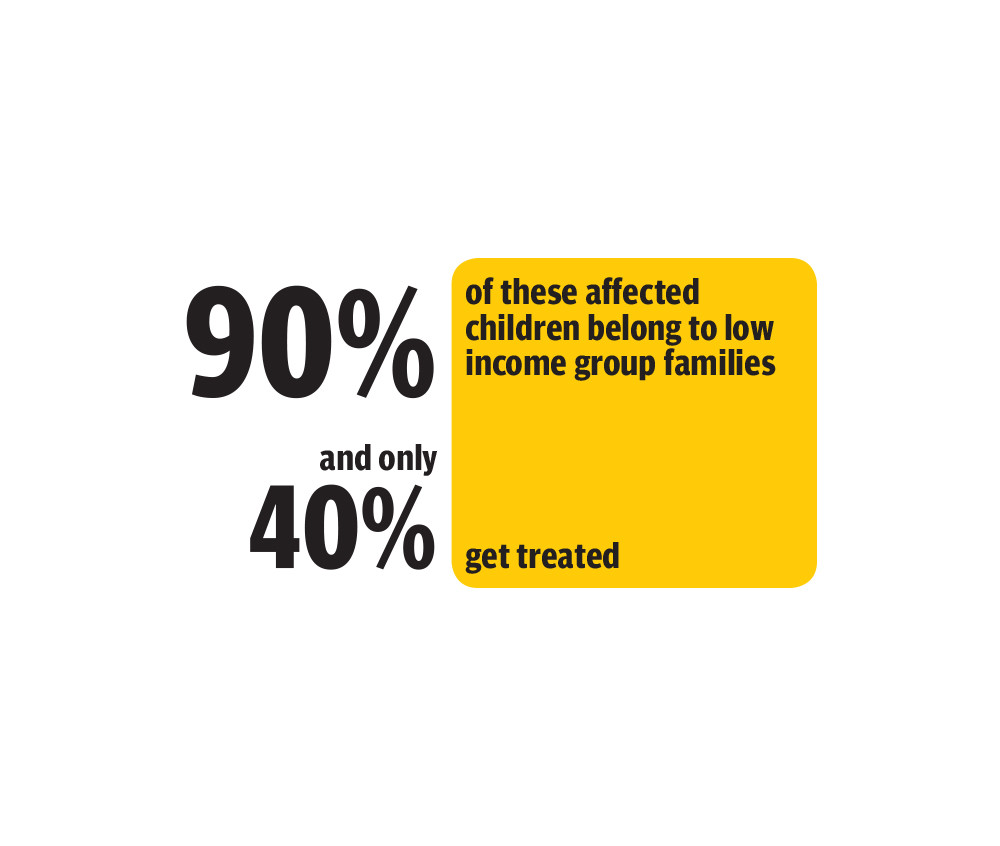 She shares one experience meeting a 25-year-old woman who came to the hospital with her face covered with a veil because of her facial deformity. She said many women in this position feel socially isolated and face issues getting married or having children because of a cosmetic issue. Dr Lamle performed an operation on the woman who walked out of the hospital much more confidently than she’d walked in, with a dream for a happy life.

She said such cases where people are brought out of isolation only encourages her team to work more.