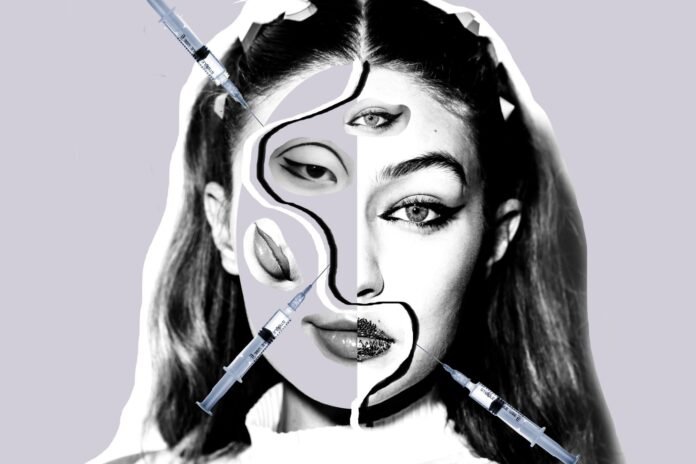 Awards season prep is in full swing — even amid the pandemic.

Dr. Harold Lancer of Lancer Dermatology in Beverly Hills has seen 16 celebrity clients so far for the upcoming awards season, which kicks off with the 78th Golden Globe Awards on Feb. 28.

Prior to the Emmys in September, which was the first of Hollywood’s major ceremonies to have a virtual production, it was unclear whether the stars would dress up or down for the show considering the tone of the country, impact of the health crisis and the Black Lives Matter movement. There was even speculation that the nominees would appear in pajamas, but in the end, most — including the likes of Jennifer Aniston, Tracee Ellis Ross and Zendaya — were in full glam. At the Globes, which is expected to be a similar scenario (a mix of in-person cameos and remote live appearances with Tina Fey and Amy Poehler hosting from opposite coasts in Los Angeles and New York), the stars will likely opt for the same.

When getting ready, whether a show is virtual or not, the beauty prep starts weeks, sometimes months, earlier. This year is no exception.

“Those two treatments have been pretty much nonstop for me through the fall and into this new year, because they produce the biggest results for my clients,” said Vargas, who has salons in L.A. and New York.

With the lack of in-person events and certain Hollywood productions on hiatus, actors have more downtime these days, she added, which has led to an uptick in services. “Doing a microneedling treatment might have been tricky when you’re going from event to event and thing to thing, but since there’s nothing going on, it’s like, ‘Hey let’s take advantage of this time and do a few microneedling sessions to really get the elasticity up and your skin looking really perfect for when you start shooting or for awards season.’”

Dr. Shereene Idriss, a board-certified dermatologist in New York, has been providing her high-profile clients with Thermage treatment, which helps tighten existing collagen and stimulate new collagen production, and Ultherapy, a nonsurgical alternative to a facelift. And for those looking for a glow, she suggests a light chemical peel.

“I do believe that a lot of my patients who are part of that world understand and subscribe to my philosophy of pace yourself,” she said. Her clients reportedly include Kaling, Emily Ratajkowski and Ashley Graham, among others. “It’s a slow and steady working progress over months before the red carpet. Because if they come to me the day before…‘I want x, y and z,’ I’m going to be like, ‘No.’ They know that’s going to be the case. It’s like going to the gym. You don’t go to the gym the week before your wedding expecting to look like your fittest. It’s something you build up.”

Every skin-care expert has his or her regimen for awards season prep.

“Before an event, usually it’s always a peel,” said Darden. “I do get a lot of people who come in for a light peel, and my favorite one is a lactic acid peel, because it’s really gentle on the skin. It gives you an immediate glow. Any skin type can use it. And you can use it the day of an event.”

For the last 12 to 18 months, however, there’s been less emphasis on injectables — neuromodulators like Botox and Dysport and fillers like Juvederm and Restylane Silk — as stars look to firm and lift their skin, as well as unify skin color and texture, said Lancer.

“Subtle is in” with the Hollywood crowd these days, he said.

“They’ve become more sensitive to the concept that excessive volumizing looks funny,” he continued. “Whether it’s because of some of the entertainment people overdoing it and looking bizarre and then there’s a rumor mill that starts, or whether just the general population has sort of refined their taste…there’s a changed focus. The days of having a gallon of filler injected are gone, because a gallon of filler may last you six, 12, 18 months, but you look like a bloated blowfish.”

Sculpting the face and body has been growing in popularity with A-listers, who have been using noninvasive contouring and firming machines like Accent Prime. The tool is often being used under the chin or jawline, echoed the experts.

“I would say eight out of 10 people came in complaining about the jawline,” said Idriss. “The jawline had a resurrection in 2020 and going into this year. I think it’s because people were looking at themselves all day on video at different angles that are obviously not great and not flattering and not necessarily real.”

Experts and practitioners are calling it the “Zoom Boom.” The catchy phrase is being used to describe the foreseen growth of cosmetic procedures during COVID-19 due to the increased popularity of services like Zoom. While stuck at home, the world turned to video conferencing for work meetings, and for some that meant staring at their own reflections on screens for hours, magnifying any existing insecurities. Plastic surgeons nationwide have said that as a result, combined with the negative impact of social media and selfie culture on self-esteem and self-image, they’re seeing more clients and are busier than ever.

That is certainly the case for Dr. Gabriel Chiu, a Beverly Hills-based board-certified plastic and reconstructive surgeon.

“I’m seeing double or triple what I usually see at the same given time for the year, and instead of having a wish list of things that they want to chip away at, they are giving me a bucket list,” he said.

“People want it all,” he continued. “Not only do they want it all, they want it all at once.…It’s not that patients want to look overdone, but more is more in terms of how much they want done and how invasive they’re willing to go, because now they have more time to recover. People are willing to push the envelope whereas before they wanted to be much more careful and make sure they could recover in time and that others wouldn’t notice.”

Celebrities now have the time to hide away for a significant period of time as they recover from plastic surgery procedures.

“In the past, patients in that [Hollywood] environment would have to wait until a hiatus in order to take care of something major,” said Chiu.

The latest plastic surgery statistics report shows that the top two most popular cosmetic surgical procedures of 2019 were breast augmentation and liposuction, according to the American Society of Plastic Surgeons. Liposuction has the number-two spot at 265,209 procedures, which is up 3 percent from 2018.

“They are doing lipo around the jawline to sharpen it and taking fat into cheeks,” said Chiu.

“It was nonstop for eyelid surgery, neck liposuction, even face lifts,” said Dr. Stafford Broumand, a board-certified plastic surgeon at 740 Park Plastic Surgery in New York, of his celebrity clients. He’s known to have done work on Chrissy Teigen. “They were all trying to get that done to get the best look before they had to do something in person. Or if they were doing something on video, they wanted to look at good as they could.”

He’s been doing breast lifts and tummy tucks, he added. “In Hollywood or here in New York, the stage actors, they now have downtime, and they could have things done that they’ve been thinking about for a while or because maybe they gained a little weight during this COVID-19 period and so liposuction was off the charts as far as demand.”

Dermatologists and plastic surgeons noted the rise of post-procedure devices. For example, after stomach liposuction, clients are now using tools like EMSculpt, a body-contouring treatment that causes muscle contractions.

“It’s to get defined ab muscles,” said Chiu. “It’s a shortcut to having to train with a trainer for months.”

“That is a domain that is actually improving and changing quite rapidly,” said Idriss of body-tightening and muscle-contraction devices. “I think that is an area that is intriguing and exciting.”

Morpheus8, a device that combines microneedling with radiofrequency technology using longer needles, is another standout, since it not only tightens tissue but also melts fat, said Chiu.

The most asked about treatment in 2020 remained Botox, according to findings by the American Society of Plastic Surgeons, but it’s not as prominent when it comes to innovation. While Botox takes two weeks after treatment to show results and lasts up to three to four months, Dysport, available now, lasts the same amount of time and takes just two to three days to take effect after injection.

Two neuromodulators expected to enter the market this year may disrupt the space, however: Daxi provides results in three days and lasts up to six months, while EB-001 takes effect within 24 hours and lasts four weeks.

“That may be a game changer for somebody who needs a quick fixer, like going to an award show,” said Chiu.

For all experts, virtual consultations are now the norm, offering a new way of working.

Lancer has had around 20 per day since March.

“There were some people who needed ongoing maintenance of their Lancer Skincare or their program or planning for when they come out of hibernation,” he said. “I had never done virtual. That necessity arose and now I find it indispensable.”

He recently treated a high-profile celebrity in entertainment who had experienced an accidental burn on the abdomen.

“The person was very far away,” he said. “Virtually, on a daily basis, I was managing it until they came back to Los Angeles two days ago and then took over manually.”

His office was shipping orders daily: “I had two staff always in office sending things to some places I’ve never even heard of, to tell you the truth…A lot of people were isolating themselves to very bizarre places.”