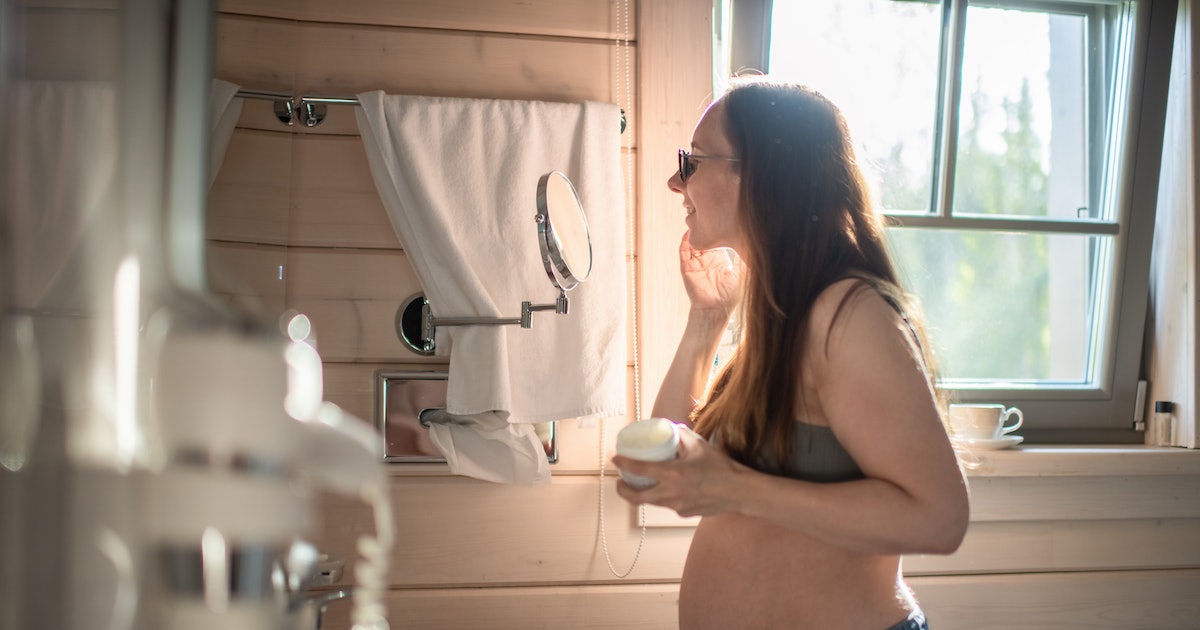 If your skin care routine includes topical retinol, you already know what a miracle worker it can be when it comes to smoothing fine lines, fighting acne, and giving you all around glowy skin. But what you put on your skin has the potential to enter your bloodstream, so it’s important to look closely at the skin care products you’re using during pregnancy and the ingredients they include. If you’re expecting, you may be wondering if you can use retinol while pregnant, because you’d hate to have to temporarily shelve the product.

The short answer is: Most experts will say no, it’s not safe to use retinol while pregnant, and it’s advised you keep it out of your skin care routine if you’re trying to conceive or breastfeeding as well. “Synthetic oral retinoids, which are derived from vitamin A, are known to cause birth defects and premature labor,” Dr. Cybele Fishman, board-certified dermatologist with Advanced Dermatology PC tells Romper. But others, including Dr. Rachel Maiman, board-certified dermatologist at Marmur Medical, who we interviewed for this article, take a different approach, saying that some topical retinol in moderation may be okay.

Here two dermatologists answer all your retinol and pregnancy questions, including what you can use instead.

Retinol is an ingredient that’s derived from vitamin A, and it does a ton for the skin (we’ll get into its benefits in a bit).

“Retinol is a type of retinoid. The term ‘retinoid’ most often describes more powerful prescription products, while retinol generally refers to weaker over-the-counter (OTC) formulas. However, their mechanisms of action and multitude of skin care benefits are the same,” Maiman tells Romper. If you’ve ever heard of the anti-acne drug Accutane, it’s actually a powerful oral retinoid (that’s known to cause birth defects). But here we’re talking about topical retinol (a slightly gentler version of which is called retinyl palmitate) and that can be found in cleansers, serums, moisturizers, or oils, or on its own as a treatment. And from producing collagen to helping stop acne in its track, the ingredient is powerful for the skin.

What are the benefits of retinol?

Retinol is kind of like the triple threat of skin care; it really can do it all.

As Maimar explains, retinol increases the turnover of skin cells, reduces hyperpigmentation, and helps keep skin cells from clogging pores. “[Retinoids] are especially known for their anti-aging properties, which stems from their ability to directly stimulate the production of new collagen and elastin, which thickens the skin and results in less noticeable fine lines and wrinkles over time,” she adds.

Some people don’t realize that retinol is also a powerful acne fighter (it appears in common anti-acne treatments, like Differin gel). It helps to unclog pores, revealing clearer skin, and smooth texture.

Most experts will say that retinol is not considered safe for pregnancy, and many doctors agree with that stance. According to Fishman, topical retinoids, including retinol, are considered category C by the U.S. Food & Drug Administration (FDA) which means animal studies have shown a risk to the fetus, but there are no well-controlled studies in women (largely because it’s ethically difficult to conduct studies on pregnant women). “For this reason, we recommend all topical retinoids be avoided during pregnancy,” Fishman says.

However some doctors, including Maimar, may take a more lenient stance on topical retinoid (oral forms of the ingredient including Accutane should never be taken by anyone who is pregnant or breastfeeding). A not often cited part of category C is that products and drugs that fall into that category may have “potential benefits [which] may warrant use of the drug in pregnant women despite potential risks.”

“The general guideline is to stop use of retinol in pregnancy,” Maimar tells Romper. However, this is all theoretical and the damaging effects of topical retinol on a fetus have never really been proven. Oral retinoids, like isotretinoin (Accutane), definitely cause birth defects, and so that is where concern has arisen over what impact a topical form could have.”

She says that there isn’t any data to back up the fact that topical forms of retinol are dangerous during pregnancy, and if anything, most evidence points to low systemic absorption of retinol applied to the skin, meaning a low risk to the fetus.

“Really, we don’t recommend retinol in pregnancy for the same reason we don’t recommend most things in pregnancy — there is insufficient substantiated data to prove it’s harmless,” Maimar says. “But, there is also insufficient data to show it’s harmful, so keep that in mind. The reason this data doesn’t exist is that no one wants to line up a bunch of pregnant women and risk their unborn children for the sake of science. So, most of us say to avoid things you don’t know for sure are okay.”

So if you accidentally use a product that contains retinol during your pregnancy (sometimes it’s hidden in cleansers or oils where you wouldn’t expect it) or your OB-GYN feels that it’s safe, you don’t have to freak out.

What can I use in place of retinol while pregnant?

It’s understandable if you’re sad to have to shelve your favorite ingredient while you’re pregnant or breastfeeding, but the good news is there are other pregnancy-safe ingredients that functions a lot like retinol.

We at Romper only include products that have been independently selected by our editors. We may receive a portion of sales if you purchase a product through a link in this article.

If stubborn hormonal acne is your pregnancy skin concern, Fishman recommends azelaic acid, zinc, glycolic acid, and niacinamide. For fine lines or anti-aging, she says that in addition to bakuchiol, glycolic acid and topical antioxidants (like vitamin C, green tea, rose hip, or resveratrol) are all pregnancy-safe.

You may have heard that bakuchiol is basically a plant-based, pregnancy-safe dupe of retinol. There is some truth there; a 2014 study in the International Journal of Cosmetic Science found that bakuchiol, while not chemically similar to retinol, achieves similar effects when it comes to fine lines and wrinkles, pigmentation, elasticity, firmness, and reduction in photo-damage. However, before you rush out to buy it, know that (like retinol) opinions are mixed on whether or not bakuchiol is pregnancy-safe.

“I do not routinely recommend bakuchiol as a pregnancy-safe retinol alternative for my patients,” Maimar tells Romper. “Firstly, it’s important to note that, although Bakuchiol has been plugged as a pregnancy safe, plant-derived retinol, there are no large trials that ascertain this. Most of the studies that looked at the anti-aging effect [of bakuchiol] excluded pregnant women. There is also conflicting data that exists regarding its potential to be a hormone disruptor and estrogen mimicker. In my opinion, there are other alternatives to retinol, depending on the indication, which I can more confidently say are safe for my pregnant patients, making bakuchiol an unnecessary recommendation in my practice. These include ingredients like azelaic acid, kojic acid, glycolic acid in low concentrations, niacinamide, tranexamic acid, and vitamin C.”

If you’re going super by-the-book in your pregnancy, I totally get it, and you’ll probably want to skip retinol (and bakuchiol for that matter) if you’re expecting or breastfeeding and even if you’re TTC. And if you’d really like to keep using it topically, talk to you doctor about what they think makes sense. You’ll get to use it again eventually, but in the meantime, there are other pregnancy-safe skin care ingredients that help achieve clear, radiant skin.