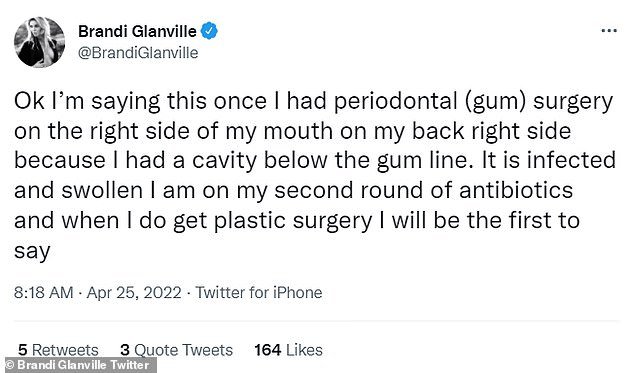 Brandi Glanville DENIES getting plastic surgery as she puts her changing face down to having swollen gums: ‘When I do I’ll be the first to say’

By George Stark For Dailymail.com

Brandi Glanville is shutting down rumors that she has undergone plastic surgery.

The former Real Housewives of Beverly Hills sent the rumor mill into overdrive recently when she appeared looking different on her podcast, which is called ‘Unfiltered.’

While some fans rushed to the comment section to beg Brandi, 49, to ‘stop with the fillers and Botox‘ she has come out on Twitter denying that she has gone under the knife.

‘Ok I’m saying this once I had periodontal (gum) surgery on the right side of my mouth on my back right side because I had a cavity below the gum line,’ she began. 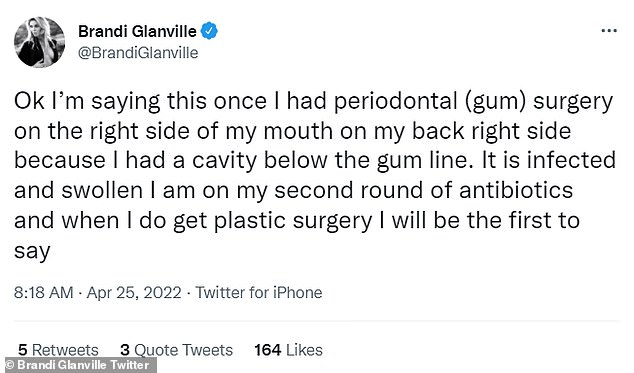 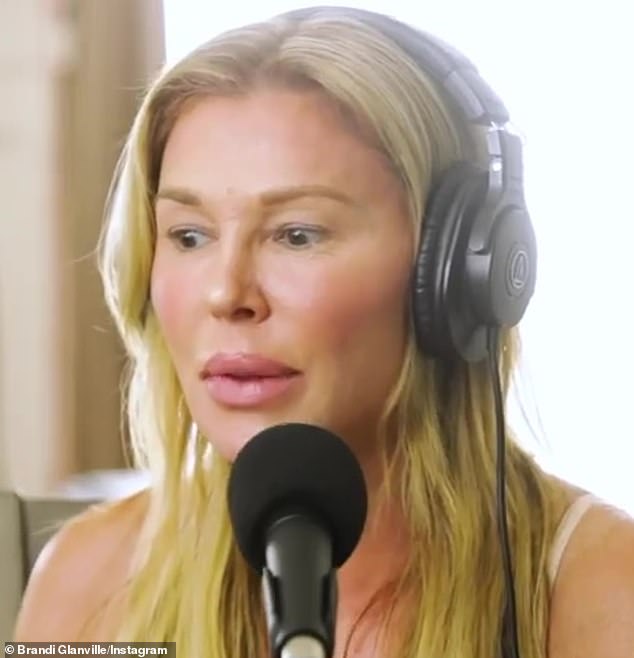 Not this time: Brandi Glanville DENIES getting plastic surgery as she puts her changing face down having swollen gums (Pictured above last week on her podcast)

‘It is infected and swollen I am on my second round of antibiotics and when I do get plastic surgery I will be the first to say.’

Earlier this week, fans flooded the comment section under a post from Brandi about the latest podcast episode, with some Instagram users pleading with her to stop using Botox and fillers.

‘Brandi, love you, but please stop with the fillers,’ one fan wrote, while another said: ‘Oh Brandi what have you done to your beautiful face sweetheart.’

‘Why mess with your face Brandy?’ another wrote, while one person said: ‘Dang girl I didn’t even recognize you.’ 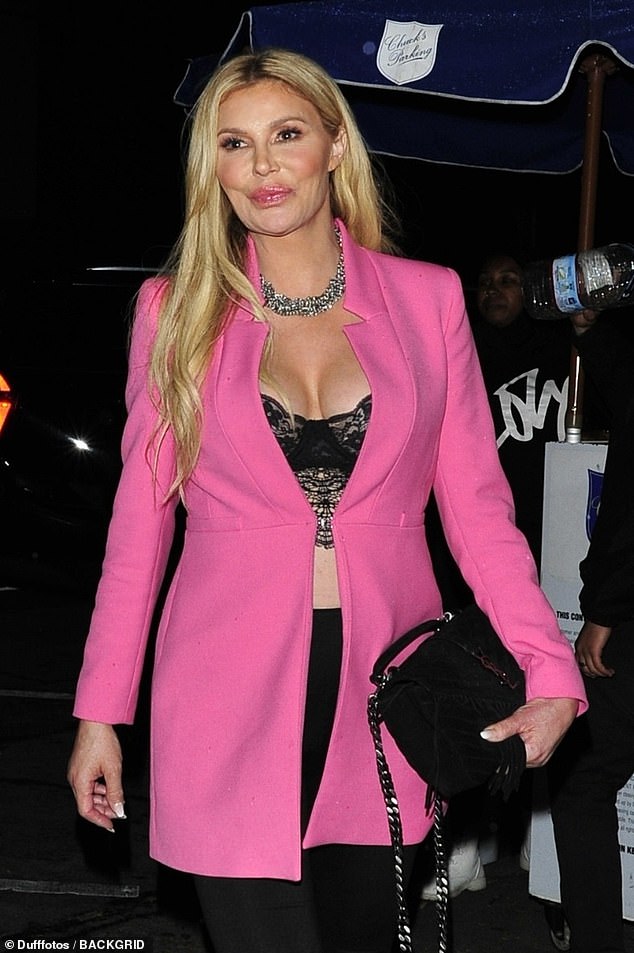 Unfiltered: The reality star is pictured above in West Hollywood last week 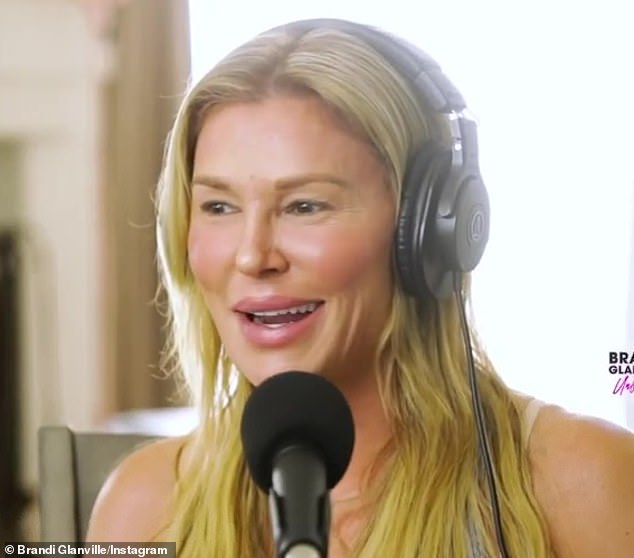 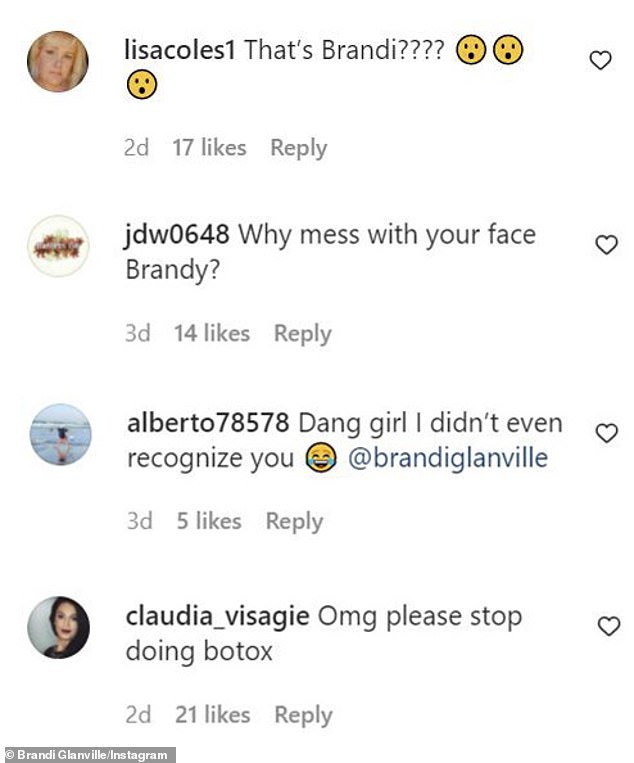 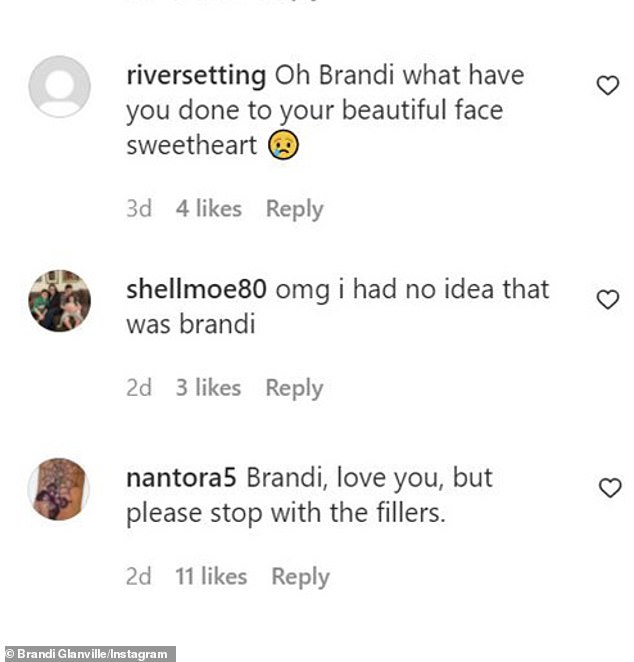 Cruel jibes: Brandi’s recent appearance on her Unfiltered podcast sparked a flurry of comments from fans 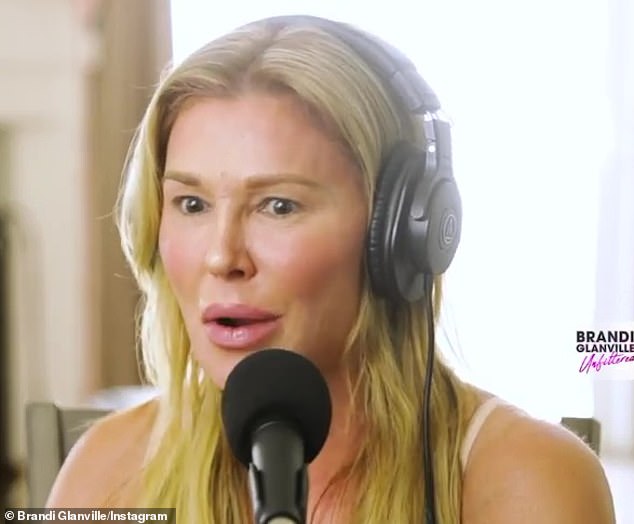 Facing facts: The star appeared on her podcast earlier this week 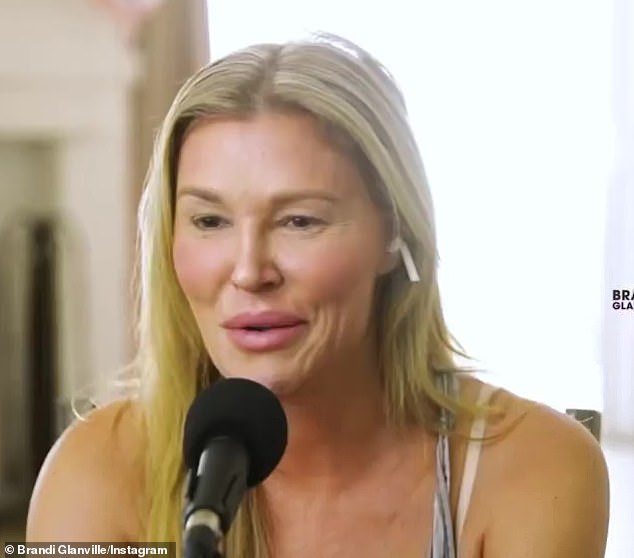 Ignore the haters: Brandi did not respond to any of the cruel jibes on her Instagram

The star had reality TV personality Amber Portwood on that particular episode of the podcast, as they repaired their feud from appearing on Family Boot Camp together.

Her next post was a defiant message, though it was not clear who it was aimed at or what triggered it.

She posted a quote that read: ‘My GIVE A F*** is still broken, but my GO F*** YOURSELF is fully functional.’

Brandi has previously admitted to having ‘a lot of Botox’, breast augmentation and vaginal rejuvenation.

In 2017, Brandi said: ‘I’ve had a f–king lot,’ when discussing her Botox habit on the UK version of Big Brother.

However, she was adamant she has not had any surgery on her face, saying: ‘I’ve only had my boobs done and my vagina tightened, that’s it.’ 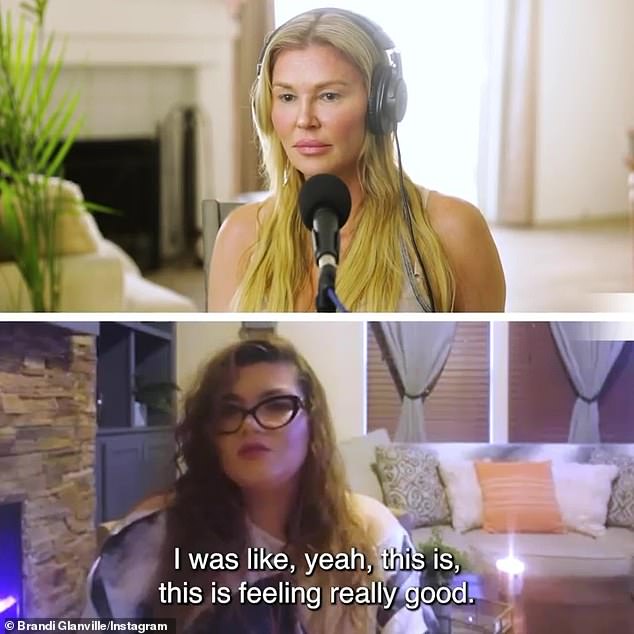 Talking point: The star had reality TV personality Amber Portwood on that particular episode of the podcast, as they repaired their feud from appearing on Family Boot Camp together 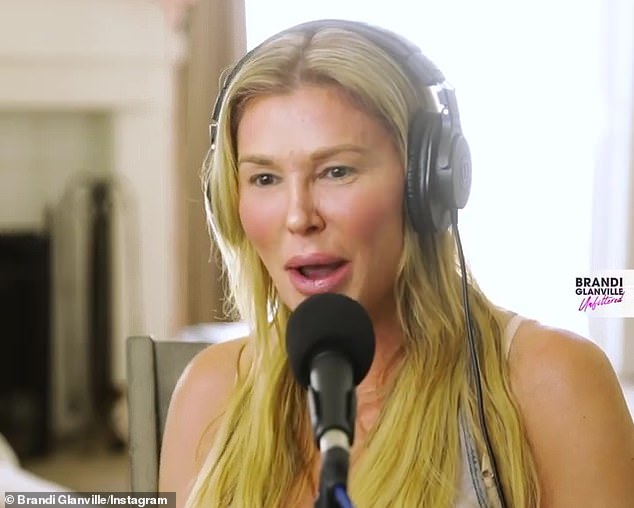 Tight visage: The star certainly appeared youthful on her most recent podcast recording 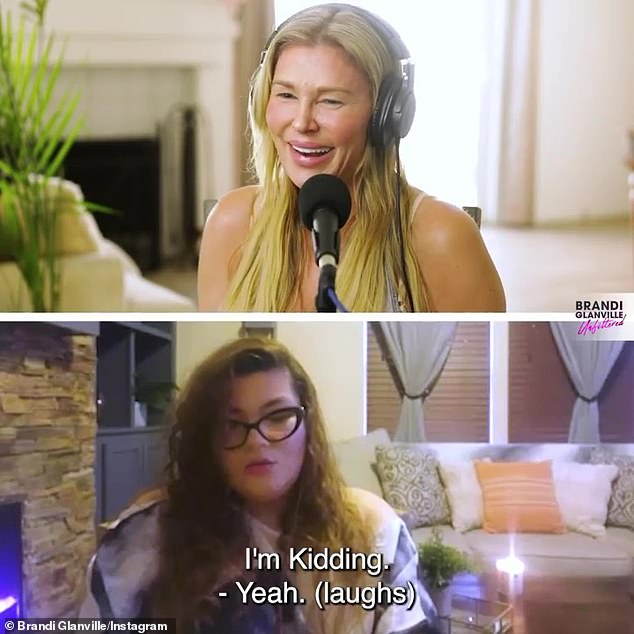 Success: The Bravo personality has been doing her podcast for her over ten years

And in her 2014 tell-all, Drinking And Tweeting, Brandi discussed her vaginal rejuvenation further, revealing that her ex-husband Eddie Cibrian unknowingly paid for the procedure.

She said: ‘This pretty intense surgery had an even more intense price tag: $12,000,” she wrote.

‘A brand-new vagina would be an Eddie-free vagina… I decided that since Eddie had ruined my vagina for me, he could pay for a new one. I gave [the doctor’s office] Eddie’s credit card number.’ 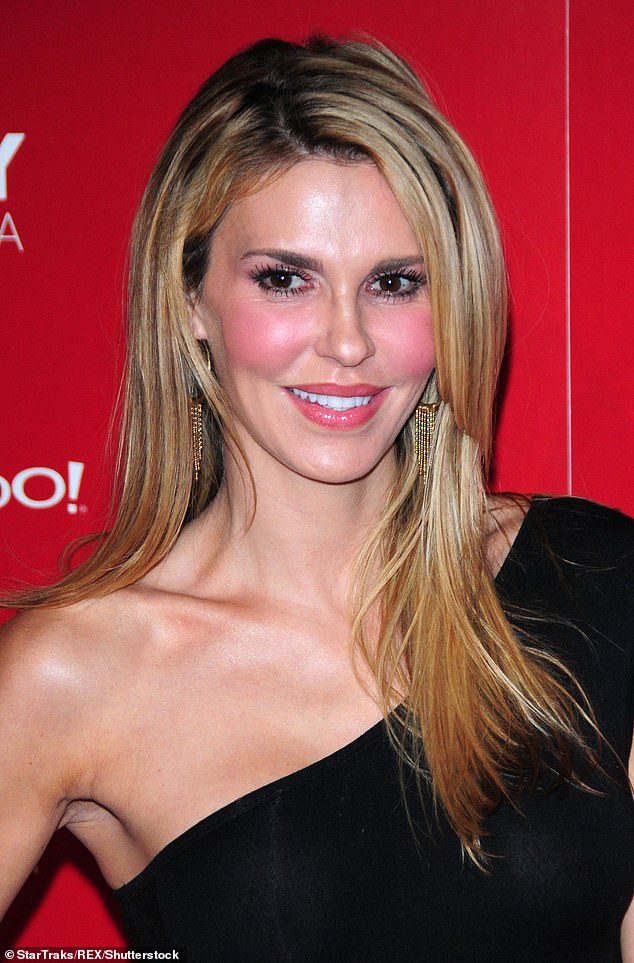 Model looks: Brandi, pictured in 2009, looked naturally beautiful when she was aged 36 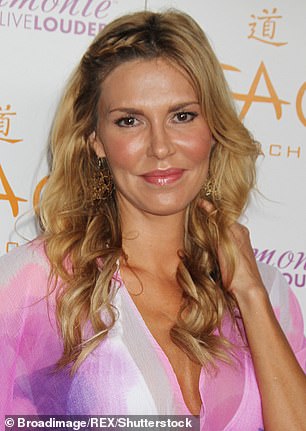 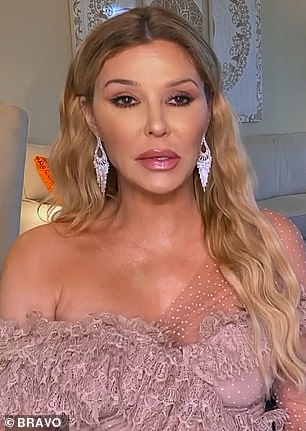 Through the years: Brandi was sporting a fresh-faced look in 2011 at a Single And Fabulous party in Vegas, (left), but last July, (right), she was forced to deny cosmetic surgery rumours