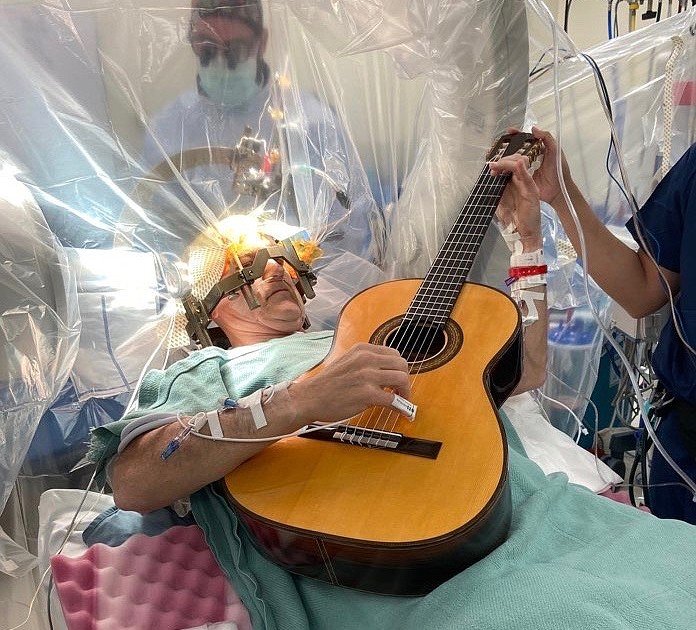 Jim Stroud lay on a surgery table strumming his guitar.

Awakened for a brief period during a seven-hour brain surgery Stroud needed to play while a surgeon monitored his brain. The moment was part of a more than a decade-long journey for the Whitefish resident as he sought a solution to a condition that had left him unable to play the instrument he loves.

“They give you the guitar,” he says. “Here I am with two IVs in my left arm and one in my right hand, and an oxygen indicator, it’s really hard to play and they are holding the neck of the guitar. I thought I played awful.”

Stroud, 67, suffers from focal hand dystonia, a neurological disorder that leads to impaired hand use that is characterized by involuntary and abnormal movements in the hands and fingers. Symptoms include subtle loss of control, lack of precision and curling of the fingers, and tremor, according to the Dystonia Medical Research Foundation. Estimates are that about 1% of professional musicians are affected by dystonia, but there are likely large numbers of musicians who remain unidentified, according to the foundation.

Stroud says musicians are athletes of the small muscles often getting injuries after practicing hours per day, but in his case, that wasn’t the issue.

“My hand moves fine, but it’s confused — it won’t do what the brain is telling it to do,” he said. “You can have dystonia in other parts of the body, but this is very precise as it has to do with my right hand. It did affect my typing and my writing, but it wasn’t debilitating for that.”

STROUD HAS a master’s degree in classical guitar. But looking for a more financially stable career ultimately became a financial manager at UBS.

Busy with his career and raising three children along with his wife, he didn’t put in much time with the guitar over the years. Then as life began to slow down some, he picked up his guitar again.

“I changed careers because I knew it was going to be hard to make a living playing classical guitar,” he said. “For 24 years I didn’t really play much at all because I was involved in building my business. But then my youngest child was graduating high school and I gave him an electric guitar. Then I picked up the classical guitar out of the closet and got re-engaged.”

He started playing again giving concerts, but around 2010 he started having problems using his hand — unable to make the precise movements necessary to play — eventually being diagnosed with focal hand dystonia.

That began a quest to overcome it. After meeting with a neurologist who works with musicians, he tried getting botox injections designed to relax the muscles in the hand, but that wasn’t successful. Then he spent a year at a clinic in Spain going through exercises in an attempt to retain his brain, but that didn’t work either. He worked with specialists all over the world, but to no avail.

“Some people will get over it, but very few do,” he said. “Usually once you get it, your performing career is done.”

UNABLE TO play his collection of handmade guitars, Stroud became frustrated all but giving up.

Then he found a brain surgery trial at the National Institutes of Health. After much discussion with doctors and other patients who have had the surgery, Stroud decided to apply to the trial.

Undergoing an extensive physical exam and multiple tests including playing the guitar for neurologists, Stroud was accepted, ultimately becoming the third musician to undergo brain surgery for the procedure.

The procedure uses deep brain stimulation utilizing a device called a neurostimulator placed in the chest that is attached to wires placed in the brain areas that affect movement. Stimulating these areas can help block nerve signals that cause abnormal movements.

During surgery, a small hole is made in the skull and wires are inserted to record brain activity and stimulate the brain while tasks are completed by the patient, in Stroud’s case playing the guitar.

Following surgery and a period of recovery, the device was turned on and then Stroud began to relearn to play the guitar.

“I sat with the guitar for 20 minutes and then nothing,” he said. “I thought I went through brain surgery and this isn’t working. The neurosurgeon told me that I had to start from scratch — some of it I would know, where to put my hands and the notes, but I had to relearn. The next day was slightly better and the next slightly better.”

The device continues to be adjusted as necessary and doctors will monitor his progress for the next five years as part of the trial. Stroud continues to practice the guitar slowly building the length of time he plays to around two to three hours per day.

“Every day for the first 45 days it got better and better,” he said. “I’ve had some ups and downs, but it’s never gotten worse. I’m hoping in six months from the surgery, on June 1, I’ll be comfortable playing in public.”

His handwriting has returned to normal, he can type again and though rusty his guitar playing keeps getting better with each week. He can still continue all the other life activities he enjoyed before too like skiing and mountain biking.

STROUD’S PASSION for music has extended beyond playing his own guitar to helping others. He was heavily involved in the Crown of the Continent Guitar Festival held in Bigfork and serves on the Guitar Foundation of America. He founded the James Stroud Classical Guitar Competition at the Cleveland Institute of Music to create opportunities for classical guitarists ages 14 to 18.

“When I was a young university guitar student practicing many hours each day and dreaming of a career as a professional classical guitarist, I often wished I owned a nicer guitar, or could attend summer music festivals and master classes,” Stroud said. “I knew how important these things were to my professional development, but these essentials were always beyond my financial reach.”

Stroud hopes to share his story with musicians knowing that his part in the trial could benefit those who also suffer from focal hand dystonia.

“It is sort of blazing a trail because 20 years ago no one knew what to do whatsoever,” he said. “I’m very glad I did it and hopefully they can learn from it.”