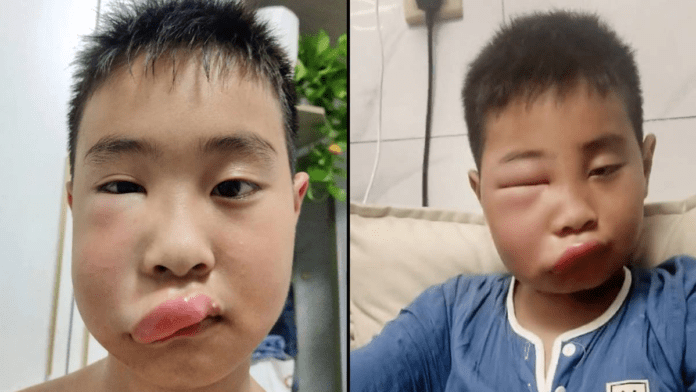 A little boy was left with a severely swollen face after he was repeatedly stung by bees when he poked their hive. You can see the shocking reaction here:

The young boy, who has not been named, was out playing in the countryside in the town of Zigong, in south-western China’s Sichuan, when he stumbled across a bee hive.

Allowing his curiosity to get the better of him, the boy then began to poke the hive and… well, I reckon you can probably guess what happened next.

After prodding the hive with a stick, he was stung at least three times and appeared to have a rather extreme reaction after his face ballooned in size.

Fortunately, the little fella has been treated for the stings and is said to be doing much better.

His mother, who also hasn’t been named, explained that he had been given medicine and had almost recovered.

While he’s physically recovered, I think it’s safe to say that the lasting impact will see him unlikely to be poking any bee hives for the foreseeable future.

Earlier this week, former Westlife singer Brian McFadden was left sporting a similar look after he had his own run-in with a bee.

Sharing a video of his painful-looking swollen face, the 42-year-old wrote: “Stung by a bee and got an allergic reaction! Owning that look! Free Botox and fillers!” Fair play to him, he took that well.

Fans were left horrified by the photo, with one writing: “That’s awful hope you feel better soon! at least you’ve kept your sense of humour.”

While someone else shared: “Oh my gosh, feel better soon!”

He later shared a slew of separate shots that showed the timeline of his growing face.

He wrote: “The timeline of the sting to reaction. Still goin,” alongside shots of a relatively minor bit of swelling that increases as you flick through, culminating in a shot of him lying in bed with this thumb up.

In a further update to his concerned fans, Brian posted a much less swollen selfie, writing: “My face is calming down again. Thanks for all your lovely messages.”