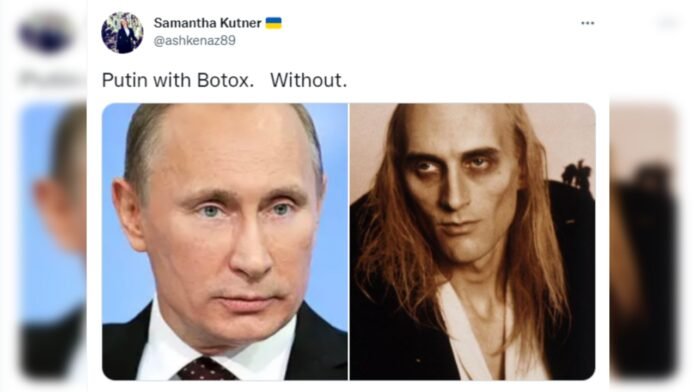 Vladimir Putin might not be able to use botox anymore

There have been rumours that Russian President uses treatment. If the rumours are true, Putin might have to stop the botox treatment soon.

The sanctions imposed by the West on due to its war with Ukraine will affect President Vladimir Putin as he might not be able to use Botox anymore, according to reports. Putin reportedly might not be able to continue with the treatment due to the announcements made by some pharmaceutical companies in the wake of economic punishment.

According to Reuters, Eli Lilly and Co, Novartis and Abbvie Inc last week said that they would continue to supply critical medicines for the treatment of cancer and diabetes, but will stop the supply of “non-essential” products that include botox.

Netizens reacted to the reports that Putin might have to stop botox treatment with memes and jokes.

One user said, “Putin’s next target would the botox store.” Another wrote, “So this is how the war in Ukraine ends.”

A third user said, “Botox injections stock has run out…. biggest challenge for Putin.” Someone commented, “I can’t wait for the Botox in Putin’s face to start drooping.”

Yet another added, “Believe it on not , This is what i heard on tv ‘Mr #Putin has been using botox and fillers but with sanctions imposed Mr #Putin’s face will collapse’ #RussiaUkrainWar.

The use of Botox by Putin has been widely reported by several media houses including The Guardian. The rumours reportedly started after Putin’s visit to the Ukrainian capital Kyiv in October 2011 as Russia’s Prime Minister, where he “sported a massive blue-and-yellow bruise around his eye”.

However, Putin’s spokesperson denied the rumours, saying, “It’s probably just how the light fell. The prime minister is tired.”