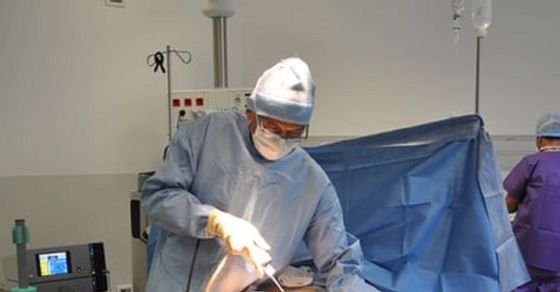 A woman from Russia has revealed she was left horrified after a botched plastic surgery turned her buttocks into a ‘terrifying size’.

Lyubov Laufer, who happens to be a clinical psychologist, said a plastic surgeon pit ‘2 liters of fat’ into her backside.

Although she has previously had minor surgical modifications to help maintain her youthful appearance, the latest procedure has done more damage than good.

Interestingly, the problems began when she underwent a successful treatment to remove breast implants after seven years due to inflammation.

Lyubov said she did want a ‘tiny amount’ of fat to be implanted into her back. However, she was not at all prepared for what she woke up to after her latest procedure.

Lyubov has now claimed her surgeon persuaded her to undergo lip filling, which means grafting her own fat to improve breast shape.

She agreed and took a four-hour-long flight to Novosibirsk for the procedure. But something was off, Lyubov was told that her medic’s colleague would perform the procedure, according to a Mirror report.

The procedure lasted five hours and Lyubov woke up with ‘excruciating pain’ and required oxygen. Then when she finally looked at herself, she went into shock.

“I felt horror when I saw my breasts and huge fear in my soul about how I would live with it. Everything froze in me. I woke up with my buttocks a terrifying size that I had not asked for,” she said.

“The doctor did not even bother to come in and find out how I was doing. The next morning I was discharged. Now all my skin is saggy over my entire body,” she added.

Lyubov said that two litres of fat had been taken from different places of her body, and mostly inserted into her buttocks.

The clinic, however, has denied doing anything wrong. In fact, they have threatened to sue Lyubov if she continues to complain about the procedure. Reports said that Lyubov is now taking action against the doctor via the ethics committee of the Russian Society of Plastic Surgeons.