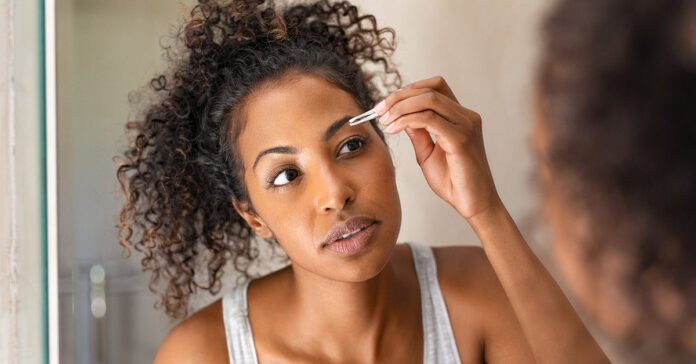 Tweezing is an economical and easy way to get rid of stray hairs. It may not, however, always be the safest or most effective way to rid yourself of unwanted fuzz on your face and body.

And plucking hair may even stimulate growth rather than diminish it (more on this later).

In this article we’ll go over where it’s OK to tweeze and where you should avoid it. We’ll also provide tips on how to pluck hairs effectively and safely.

According to Statista and based on data acquired by the U.S. Census and Simmons National Consumer Survey, 28.05 million Americans used at-home hair removal products in 2019.

Getting rid of unwanted hair is more than just big business, however. Hirsutism (excess hair) can be emotionally upsetting and time consuming for many people.

Too much hair in undesired places is more than just an annoyance. For some people, such as women with polycystic ovarian syndrome (PCOS), hirsutism can have a large emotional impact on self-esteem and body image. To combat this, many people turn to tweezing.

Reaching for your tweezers is commonplace, whether it’s for the removal of an unwanted unibrow, an errant gray scalp hair, or extensive, unwanted hair on the face and body.

What areas of the body do people commonly tweeze?

Is plucking bad? The answer to that question lies in where on your body you’re plucking hair and your tweezing technique.

“Nobody likes stray hairs on their face or body, whether they’re above or below the eyebrows — those pesky chin hairs, toenail hairs, or a stray hair on the cheek. Before you rush to pick up a tweezer, however, you need to do so carefully, so as not to end up with ingrown hairs, scarring, or irritation,” says dermatologist Dr. Annie Gonzalez of Riverchase Dermatology.

According to Gonzalez, places you should never tweeze include:

“One must know the number one no-tweeze zone: the nose! Never tweeze nose hair. Hair is there to prevent infection and bacteria. If you have an overgrown follicle beneath the nose, that can be carefully trimmed with sterilized nail scissors,” Gonzalez says.

No-tweeze zone number two? Moles. Yes, moles that have small hairs growing out of them are very common. But tweezing these hairs can cause inflammation and infection.

If it’s really troublesome to you, consult with your dermatologist about:

“Never touch an ingrown hair with a tweezer but rather, see a dermatologist,” Gonzalez says.

Avoid tweezing sensitive areas, such as nipples or underarms

Other areas you to think twice before tweezing include around the nipples, vaginal area, and underarms.

The skin is very sensitive in these areas and can easily become irritated or scarred. Tweezing sensitive skin can also be painful.

Another potential no-tweeze zone is in a pimple. Pus pimples that form around a hair shaft can sometimes be a minor type of infection, known as folliculitis.

In these instances, removing the hair may help clear up the infection. However, it may also make infection worse by introducing bacteria to the area. In some instances, tweezing pimples may even lead to scarring.

Tweezing isn’t all bad. There are times when reaching for tweezers may be the best solution.

“When done correctly, plucking removes the entire hair from the follicle, keeping it from growing back for up to 6 weeks. If you tweeze with skill in an area such as the eyebrows, it can give you more control than waxing,” Gonzalez says.

Here are some tips to tweeze safely.

When you tweeze a hair, your goal is to pull the hair shaft out of the skin, at its root. You may, however, wind up breaking the hair, causing it to snap back where you can’t get to it.

If this happens, don’t try to dig out the partially tweezed hair, as this can cause skin irritation or infection. It can also result in an ingrown hair.

To tweeze effectively, always use sterilized tweezers that are also not dull or unaligned. Damaging your tweezers, like dropping them repeatedly, can make them less effective at gripping hair.

Pull hair at an angle, following the grain of the hair

Always pull the hair out at an angle, going with the hair’s grain, rather than against. This will help avoid breaking the hair. It also may help reduce the likelihood of ingrown hairs, and may be less damaging to hair follicles.

Keep in mind that tweezing isn’t meant to be a permanent fix. Tweezed hairs come back, needing to be tweezed again.

The growth pattern for individual hairs isn’t synced, so any area of the face or body that you routinely tweeze may require daily tweezing to be hair-free.

A done on mice at the University of Southern California found that tweezing hairs that grow closely together in a small, densely packed location may actually promote new hair growth.

Plucking hairs that were located far away from each other didn’t produce the same effect.

The researchers determined that hair follicles located close to each other can orchestrate a unified response to the injury and inflammation caused by tweezing.

This response is known as quorum sensing. The plucked, distressed follicles secreted CCL2, a chemical that generates a white blood cell response. This generated regrowth in the plucked hairs, plus stimulated new hairs to grow.

This study may hold promise as a potential cure for balding.

Consider these other hair removal techniques if you want to skip the tweezers.

Shaving is an inexpensive and fast way to temporarily remove hair on the surface of the skin. It works well for large areas, such as the legs. Shaving is commonly used on the face and underarms as well.

There are many types of razors, including disposable razors and electric shavers. These range from inexpensive to more expensive electric models.

Shaving can be done at home and can quickly remove hair, but you’ll remain hair-free for only a couple days or less.

Shaving can cause stubble, irritation, and razor bumps in some people. Men of color who have curly or kinky beard hair are especially susceptible to ingrown hairs caused by shaving.

Shaving can also be irritating and cause razor bumps on some areas of the body, including the pubic region.

To get the best shave, always go with the hair’s grain instead of against it. Shaving skin that’s warm and moist can also help you get the smoothest results.

Using moisturizer or aftershave can reduce irritation and itching.

Waxing can be done by a professional or at home. It uses warm or cold wax and paper or cloth strips to pull many hairs out simultaneously by the root.

Waxing can be done anywhere on the face or body. It can keep skin hair-free for 2 to 4 weeks. You’ll have to let the hairs grow long enough to be successfully waxed, around 1/4 to 1/2 long. This can be a downside for some people.

Based on the body area you’re having waxed, waxing can be expensive. Eyebrows can cost around $20 to do in a salon. Legs or the pubic/bikini area can cost $75 or more.

If you go for a professional waxing, make sure your clinician is licensed and working in a clean environment.

Like shaving, waxing can sometimes lead to skin irritation and ingrown hairs. It can also be painful for some people.

Laser hair removal targets many hairs in an area at once. It can be used anywhere on the body or face but isn’t typically recommended for eyebrows, since the laser may be damaging to the eyes.

This treatment should only be done by a professional, such as a dermatologist or licensed laser hair removal technician.

Laser hair removal is most effective in people with lighter skin and darker hair. You may need several treatments before you see a difference in the amount of hair you have.

Laser hair removal may be permanent or semipermanent. In some instances it may only soften, rather than remove, hair.

In rare instances, laser hair removal may have the opposite effect and stimulate more hair growth, or adjacent hair growth on areas not being treated. This is known as paradoxical hypertrichosis.

It may sometimes be the result of a laser that’s too weak. It may also be more likely to occur in women who have hormonal imbalances, such as polycystic ovary syndrome (PSOS).

Laser hair removal is very expensive. It can cost thousands of dollars for each individual area of the body or face.

Based on the area being done and the intensity of the laser, this hair removal treatment can range from mildly uncomfortable to painful.

Electrolysis can be used anywhere on the face or body.

Needle electrolysis is a technique that relies on a needle or probe to zap hairs at the root, one at a time. It’s not the same thing as an electrified tweezer, which is a device you can use to temporarily remove hair at home.

Electrolysis introduces heat generated by shortwave radio frequencies into the hair’s root in an effort to kill it. It produces permanent to semipermanent results.

Technicians who use a Teflon-coated needle may produce more immediate, permanent results than those who use standard needles.

It’s very important to use a highly qualified, licensed technician, and to specify that you’re getting needle electrolysis. An inexperienced practitioner can easily cause scarring, so choose wisely.

Today’s electrolysis is gentler than it was in decades past. However, this technique can be significantly painful for some users.

Since it only targets one hair at a time, many sessions may be required before you see results. For this reason, electrolysis may not be practical for large areas of the body, such as the legs.

While not as expensive as laser hair removal, electrolysis can also cost hundreds to thousands of dollars before each hair is permanently removed.

Temporary, significant reddening of the skin can result from this procedure.

Dermaplaning is also called facial shaving. For this procedure, a dermatologist or aesthetician will use a scalpel to lightly scrape and exfoliate the skin while removing surface hair.

It’s typically done to eliminate peach fuzz on the face, sometimes as part of a facial.

Dermaplaning is gentle and shouldn’t hurt. However, if you have sensitive skin, it’s best to avoid this treatment.

Dermaplaning temporarily removes hair on the skin’s surface. It’s not recommended for thick or coarse hair.

While it may give you your desired results, it’s not considered particularly effective as a hair removal technique for people with hirsutism or extensive hair growth.

Tweezing has its place, but it shouldn’t be used everywhere on the face or body.

Never tweeze nose hairs or hair growing out of a mole or pimple.

Other forms of hair removal may be better for certain body areas.

Everything You Need to Know About Electrolysis Hair Removal