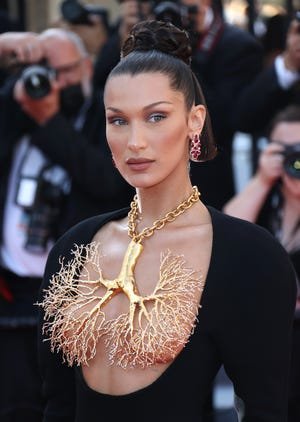 For years, Bella Hadid denied she’d had plastic surgery. But now, she’s changing her tune and speaking about a cosmetic procedure she regrets: the nose job she got when she was 14.

“I wish I had kept the nose of my ancestors,” Hadid told Vogue last week. She’s the daughter of Dutch-born former “Real Housewives of Beverly Hills” star Yolanda Hadid and Palestinian real estate developer Mohamed Hadid. “I think I would have grown into it.”

And it’s not uncommon for teens to get cosmetic procedures. According to the American Society of Plastic and Reconstructive Surgeons, nearly 230,000 cosmetic surgeries were performed on teens ages 13-19 in 2017, and some as young as 15 are even documenting their plastic surgeries on social media.

‘I was the uglier sister’:Bella Hadid admits she got a nose job, opens up about insecurities

According to Dr. Steven Pearlman, a board-certified facial plastic surgeon, it’s legal to perform plastic surgery on anyone under 18 — as long a parent or legal guardian consents. However, some experts caution it can be “damaging” and “concerning” for teens who are under 18 to get cosmetic procedures while their bodies are still developing.

“Girls nowadays live in a culture with so much pressure to change their appearances, whether it’s putting on makeup or something more extreme like cosmetic surgery,” says Leora Tanenbaum, feminist and author of “I Am Not a Slut.” “But rather than judging or shaming individuals (like Hadid), we need to think more collectively about the pressures young women face to look a certain way.”

The problem with teen girls getting plastic surgery

For some, cosmetic procedures can provide a boost of confidence that’s especially critical for those who lack self-esteem or are bullied.

Pearlman says that in his experience with young patients, “it’s more often that the psychological impact of a rhinoplasty, (like) improved self-esteem, surpasses the physical changes to their nose.”

However, he says teens need to be emotionally mature enough to understand the complications that come with surgery. Though there’s aren’t additional risks for teens, potential side effects of a nose job, for example, include bleeding, infection, poor wound healing or scarring according to the American Society of Plastic Surgeons.

“Some teens are more psychologically mature than others, but it’s important to note that their brain development is not at a point where they can really think through long term implications and they aren’t able to fully appreciate what the consequences might be,” explains Diana Zuckerman, president of the National Center for Health Research.

In addition, research shows that teens between the ages of 13 and 19 are especially vulnerable to peer pressure and more likely to have an unhealthy fixation on physical beauty, which may drive some to get procedures that they will later regret.

A ‘no win situation’

Though the decision to get plastic surgery can be empowering, experts say the marketing of these procedures to young girls is not: Rather “it’s almost always damaging” when social media and influencers force an impossible blueprint of beauty onto teens.

“The current message is, ‘This is what you’re supposed to look like, and if you don’t, it should be fixed,” Zuckerman says. “And often these teens never even considered these features as ‘imperfections’ until they were pointed out to them.”

This is a symptom of what experts call a “surveillance culture,” where women’s physical appearances are constantly monitored and judged: People who deviate from traditional beauty standards are pressured to change, while those who do conform are told there’s always more to improve. Tanenbaum says it’s especially draining for women of color, who are often excluded from the Eurocentric feminine ideal.

“It speaks to the fact that women exist in this impossible space where we have to be real but not too real. We have to enhance our appearance but if we enhance it ‘too much,’ then we’re not authentic,” says Tanenbaum, calling it a “no-win situation.”

“For minors and parents considering having these procedures done, think about the price you will be paying societally by making this decision. Because for every individual, no matter how empowering it is for them personally, that strengthens and reinforces the pressure for everyone else,” Tanenbaum says.

Ultimately, it is up to the teen and their parent to make an informed decision about proceeding with plastic surgery.

But in an ideal world, Zuckerman hopes plastic surgeons and practitioners will use their discretion to hold off on performing cosmetic procedures on teens.

“I think it’s in parents’ and children’s best interests to delay those decisions partly because the standards we have about what is beautiful will likely change… but I know parents can feel pressured by their teenage children, and they just want their kids to be happy,” she says.

“So it would be great if surgeons had some kind of basic ethical decision of denying certain kinds of surgeries until a teenager is of age, like at least 18.”

Glute pumping and lip plumping:TikTok trends insist the body is always something to improve. At what cost?