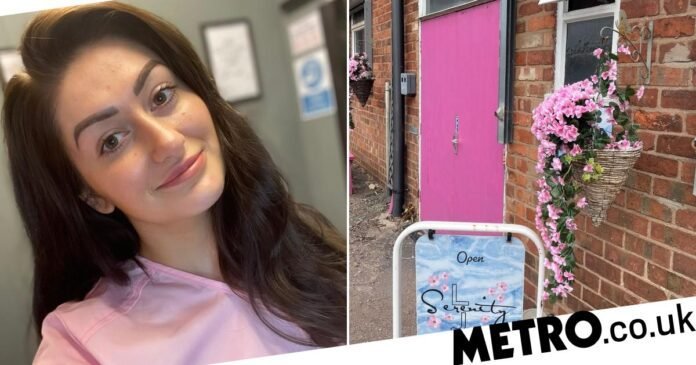 A fuming beautician has slammed a pair of ‘Botox bandits’ who fled her clinic without paying their £510 bill.

Jade Adams, 28, said the pair, who claimed they were mother and daughter, staged an elaborate scam to swindle free treatments.

She posted pictures of the women on Facebook and contacted police after they targeted her last Monday, June 13. Jade says they booked an appointment at her beauty clinic, called Jade Louise Aesthetics, in Coventry.

Minutes after receiving their one-hour treatments, they left a coat in the waiting room suggesting they would return but never did.

Jade, who has run the clinic for 18 months, said: ‘It’s pretty disgusting really because it was all a scam. They booked a double appointment but refused to pay a deposit.

‘I thought it was a little off but then they made a follow-up appointment for two weeks’ time which made me think they were on the level.

‘The woman who said she was the mum was really lovely and chatting away to me the whole time. They both had Botox and the daughter had lip fillers.

‘After they had their treatments she told her daughter to use her phone to call the nail technician to put their appointment back.

‘The daughter left the room and after a few minutes the mum said she’d go and find her to get her phone back.

‘She left a green parka over a chair so I obviously thought she’d be coming back for it but she never did.

‘I feel pretty stupid and upset about it.’

Jade, who takes photos of her clients for insurance purposes, posted the images on Facebook in a bid to track them down.

Writing on her Facebook page, Jade said: ‘Unfortunately I had this lady and her daughter come in for some aesthetics treatments with my business Jade Louise.

‘Aesthetics and on time for payment left a coat in the room and left to get her daughter who had left the room and didn’t return.

‘Both have Irish accents and there are several daughters in the family. I’ve since been told this family have been doing this for years in the beauty business in Warwickshire! Please share so people recognise these women!’

Jade added: ‘I was pretty shocked because apparently the woman has some form for doing this kind of scam.

‘Some people said she’d gone to pubs and conned free meals claiming she’d found glass in them. Another beautician said she’d screamed in her face claiming her eyebrows weren’t straight.

‘I’ve posted the pictures on Facebook as a warning to other people.

‘I’m passing the pictures to the police. I just hope they get caught before they con someone else.’

West Midlands Police have confirmed Jade Adams has reported an allegation of theft.

Get in touch with our news team by emailing us at [email protected].

For more stories like this, check our news page.

Get your need-to-know
latest news, feel-good stories, analysis and more