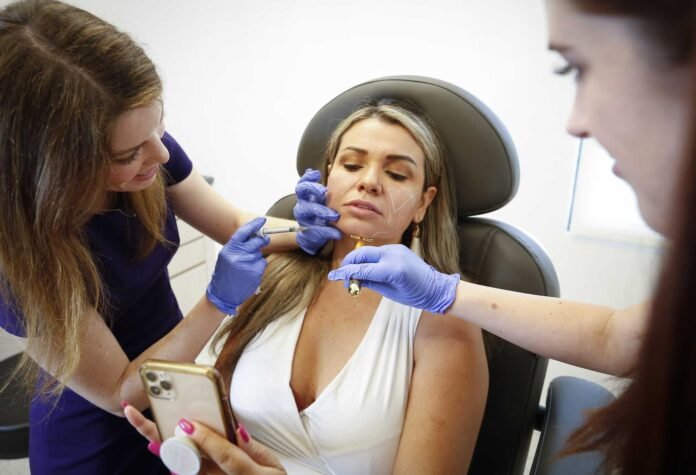 A few months into the pandemic, the 38-year-old entrepreneur found herself focusing on what she called vertical wrinkles and lines on her forehead.

“On Zoom calls, I noticed the reactions my face made when I smile or frown,” De Amat said during a recent cosmetic procedure at Houston’s Westlake Dermatology. “I’m a newbie — I just started doing this during the pandemic.”

Since initial COVID protections were lifted, plastic surgeons across the country have seen a skyrocketing increase in demand for cosmetic procedures. But for the first time, breast augmentation is not the most popular surgery, according to Dr. Kristy Hamilton, plastic and reconstructive surgeon at Westlake Dermatology.

“This year, we’ve seen more eye lifts, nose jobs and face-lifts,” Hamilton said. “There has been an explosion in aesthetic procedures surgical and nonsurgical.”

The American Society of Plastic Surgeons confirmed that liposuction, rhinoplasty, eyelid surgery and face-lifts are the five most popular cosmetic procedures this year. Nationwide, patients have begun requesting “everything from chin liposuction to face-lifts with greater frequency than ever before.”

Patients want more nonsurgical or “med spa” procedures, such as Botox and fillers, according to the society.

Hamilton attributes the boom to two things: frequent virtual meetings and the freedom people have to recover under their face masks. Options changed for those who wanted to improve their self-image but were insecure about “having work done,” she said.

The nonsurgical cosmetic procedure trend is skewing younger, too. People in their 20s and 30s are seeking lip augmentation through fillers and Botox for burgeoning crow’s feet around their eyes or contouring the jawline or “jowls” area.

The Museum District dermatology practice received essential business status, so it didn’t shut down during the early months of the COVID-19 pandemic, Hamilton said. She called 2020 and 2021 an interesting year for plastic surgeons.

Snapchat, Instagram and TikTok face filters have created a new way for people to see their faces. Pre-pandemic, people brought in filtered photos of themselves, asking to look like what they saw on social media, Hamilton said.

That is a trend that’s not going away, she said. However, some want the optimized version of their face with little concern about whether it is an unrealistic change.

“Before, people would bring in pictures of a celebrity’s face and ask for adjustments to look more like that person,” she said. “But lightly edited pictures give me an idea of the visual that customers want. It’s still just your face.”

Though still new to the practice, De Amat sat like a pro as Hamilton and her assistants laid out several needles for multiple facial injections.

In July, De Amat requested a forehead Botox, cheekbone highlights and a “Nefertiti lift,” a procedure that injects filler along the jawline and neck, which creates a “minilift,” rather than a full face-lift.

De Amat’s lips were “flipped” with filler to create a bigger pout, while Hamilton injected Botox to her depressor anguli oris, a muscle that pulls down the corner of the mouth, for a “happier” resting face.

Lastly, De Amat received masseter Botox along the bottom part of her face to help alleviate teeth grinding, while creating a sleeker V shape on the jaw.

Each of these are considered minimally invasive and patients’ faces are numbed before starting, Hamilton said.

The fillers are made up of hyaluronic acid, which Hamilton said is a “plumper” that holds on to water in the skin for a voluminous effect. In plastic surgery circles, it’s called a liquid face-lift that requires little recovery time and is “nearly painless.”

The look on De Amat’s face told a different story as the surgeon began the injections along her cheekbones. It was a momentary lapse in her determination to reach that virtual meeting selfie perfection.

“No one knows facial anatomy better than us,” Hamilton assured her. “We do faces.”

The pandemic is not over, but surgeons wonder if facial procedures will remain the most popular. Dr. Lee Daniel, an Oregon plastic surgeon, believes virtual meetings aren’t going anywhere even when office employees return to shared workspaces.

“Thanks to the rise of Gen Z and platforms like TikTok, (millennials) are also acutely aware that they are no longer the young kids on the block,” Daniel wrote. “Unlike previous generations, they are facing 40 while living in an online world. Even if the new normal were to fully disappear, social media will not.”