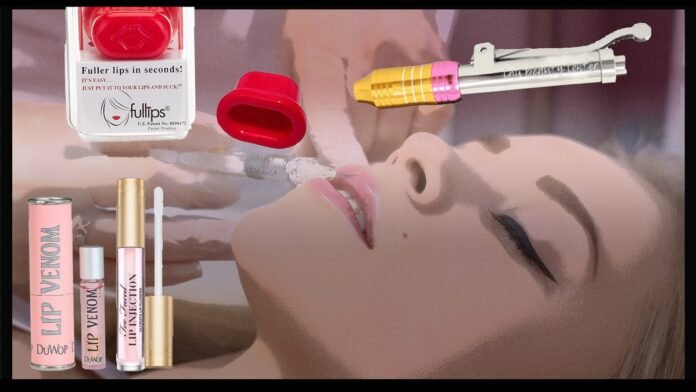 Earlier this month, a video went viral on TikTok of a user named @kellywilllliams administering her own lip filler, in her own home, with seemingly no license to do so. “PLEASE DO RESEARCH BEFORE DOING THIS ON YOUR OWN!!” read the post, which went private no more than 48 hours later. “They [usually] swell and get bigger after a couple days, so come back to see final results.”

Our first thoughts: Whaa? Oh dear god. No. But then, again, should we really be surprised? It’s 2021. Cars drive themselves. People have been implanting microchips in their bodies for years. Lil Uzi Vert just got a $24 million forehead diamond. A quick look around YouTube reveals that ill-advised as it may be, a lot of people are using at-home kits—easily purchased online—to do their own filler jobs:

Many of these content creators are using tools known as hyaluron pens, which look like those big plastic fake syringes that come in toy doctor kits for kids. While they aren’t actually giant needles, they do use pressurized air to force filler into lips and folds. They also make a sound akin to the stun gun from No Country for Old Men:

These hyaluron pens can be purchased on marketplace-type sites that clearly do no vetting as to their safety or efficacy, like Alibaba, Amazon, and eBay, or from faux med spas like Avilora and Cali Beauty Center. (Several reviews for these products warn that they arrived in used and unsanitary condition.) Jars of filler for the pens—of similarly questionable origin—are listed on Wish, Etsy, and other sites. And some proponents of the pens claim to be happy customers. But, as always, some people make very bad decisions.

Is it plausible to think that maybe we’ve broken some late capitalist consumer threshold, wherein rookies with a steady hand can safely self-administer injections? Are DIY lip fillers the new quarantine haircut, or DIY piercing?

We decided to ask someone who actually knows what they’re talking about, so we contacted Robert Sheffield, MD Plastic Surgery of SB Aesthetics in Santa Barbara, California. He is not only a third-generation physician with over 20 years of surgical experience, but an expert at focusing “on facial aesthetic surgery [that includes] minimally invasive and non-surgical ways of facial rejuvenation.” So, basically, he’s someone who should be capable of sniffing out any sus marketing and hyaluronic danger.

For starters, Sheffield points out that the kits are not the same thing as visiting your friendly local Juvederm injector. “It is hard for me to think the FDA would allow the selling of a device that pierces the skin,” Sheffield told VICE. “To do that, it is my understanding [that] you need a license. Self-piercing is one thing, but selling a product to inject sounds medical to me, [and not part of] cosmetics.”

What exactly are the risks of home filler kits? According to Harvard Medical School, “One risk is that fillers purchased online can contain a variety of non-sterile substances, such as hair gel. When injected, these substances can cause allergic reactions, infections, and the death of skin cells.” Still feeling a YOLO DIY? “Another risk is that improper injection technique can lead not only to swelling and lumpiness, but also more serious side effects such as death of skin cells, and embolism leading to blindness.”

If blindness by way of hair gel isn’t enough to sway you, the Federal Drug Administration has some choice words: “NEVER buy dermal fillers on the Internet. They may be fake, contaminated, or harmful. ALWAYS work with a licensed health care provider who uses FDA-approved products for treatments. Vials should be properly labeled and sealed. If your health care provider offers a procedure using a dermal filler that is much cheaper than similar procedures using FDA-approved dermal fillers, or if a product has labeling that looks strange or different than usual, beware.” The horror stories are out there, including people who have experienced cysts, scars, and even near-loss of their lips after messing around with these DIY kits.

The American Med Spa Association even has a page dedicated to issues surrounding the use of hyaluron pens specifically, noting, “Since this product is so new, there are no specific laws that directly address who may use it.” But just because something is legal via loophole doesn’t mean it’s safe, and it seems likely, according to the AMSA, that these devices will soon require more regulation and medical supervision for use. “Although there is no needle being used, the skin is still being ‘pierced’ by the jet of hyaluronic acid,” the page reads. “As such, we believe these pens will follow the same or similar rules as injecting filler using traditional syringes.”

So, TL;DR: They’re a bad idea. Buying unidentified filler from a site that also sells fart-proof cargo pants is a bad idea.

Still, there are a lot of people out there who want big, bouncy lips. So what about all those other no-needle products? We’ll get to the balms and glosses, but for those seeking something more extreme, there are suction lip tools that promise seemingly instant and harmless results. For under $20, you can buy a product that claims to give you “fuller lips in seconds.” All you have to do is “put the opening of the product over your mouth and gently suck in for 15-30 second increments to avoid bruising. The suction results in full luscious lips.”

Is it worth it, for “1-4 hours” of supposed plumpness? There are over 3,000 reviews on Amazon alone, ranging from glowing (“…so impressed with results I wanted to share”), to gosh-darn (“Heck! Never even bruised when I had lip injections done years ago! Waste of money!”) to GTFO (“Even a water bottle top works better”). Yes, water bottles—they’re kind of an old Level 1 lip hack once known as the “Kylie Jenner challenge.” Don’t do that, either.

These days, TikTok users are even laying on eyelash glue to create the appearance of bigger lips (to be fair, usually as a prank):

But as far as more traditional cosmetics go, stay a while in the #LipFiller hashtag, and you’ll inevitably come across some less terrifying and more advisable solutions. Take, for instance, the cult favorite Too Faced Lip Injection gloss:

Lip Injection comes in regular and “Extreme” versions, both of which claim to enhance the appearance of lips via a “patented formula … based on medically-proven blood vessel dilating technology touted to create the sexiest pout this side of a plastic surgeon’s office,” according to the product description on Sephora. TikTok is full of its visual testimonials:

Plumping glosses like Lip Injection—and the 2000s throwback version DuWop Lip Venom—do their magic (dilating blood vessels in the lips) with a combination of irritants (nothing extreme, just spicy food-grade stuff like mint, ginger, and cinnamon oil) and super-hydrating ingredients. Some users of Lip Injection Extreme describe an all-caps “INTENSE” tingle, or even a “STING” (according to more than one review), burning feeling, or “irritation.” Lip Venom contains cinnamon, ginger, jojoba and avocado oils to “help to create the tingle [and] provide your lips with a chic sheen.”

Some day, when the aliens excavate the ruins of our Targets, Wetzle’s Pretzels, and the precious mausoleum of Lindsay Lohan, they will find the latter flanked by tubes of this stuff. We asked Sheffield whether these tingly products might come with their own concerns, with that “blood vessel dilating technology” and all.

“My brief assessment,” says Dr. Sheffield about Too Faced, “[is it’s] a topical application to the lips, which I assume causes modest swelling of the lip, to enhance the fullness … The one photo shows a nice result, but there is no science or proof that a result will be like that in every person. I am unsure if atelocollagen is the product that causes the lip swelling.”

Atelocollagen is a water-soluble form of collagen used in cosmetics, often derived from animal products (you can read this suggested article from Dr. Sheffield for more info). And while we are absolutely not going to make any medical claims by saying this, it sounds like a way safer avenue than any online DIY lip injection kit.

Still, Sheffield underlines the consumer confusion that can arise from big metaphorical marketing tactics. “The cosmetic industry is very competitive,” he says, “and the labeling of a product [like Too Faced Lip Injection] was purposely done for promotion. The state of California should be aware of the labeling or naming of a product that is not injected.”

At present, a lot of people are striving for maximum Instagram Face, and we must admit that there was something intriguing about the image of hyaluronic acid flowing like honey, unfailingly, from a golden pen into the face flap of any old Joe White Claw Six-Pack. Worrying, of course, but not not democratizing. But the verdict is in: It’s a no-go.

Instead, you’ll have to stick to the tingly stuff above, or one of our other favorite lip products that will still put your mouth on a pedestal but are far, far, far less likely to blind or maim you. Some are for highkey-lowkey hydration, or Y2K nostalgia. None of them are hair gel in a glorified caulking gun.

The cool kid on the block

This clear stuff is a sleek nod to the 2000s, a.k.a. the Golden Era of Gloss, that doesn’t feel try-hard. Tower28 is vegan, cruelty-free, and exactly the kind of lipgloss we would’ve wanted our bubblegum-scented squeeze tubes to hang out with when they grew up. While the new California-based cosmetics company floats on the same iridescent cloud as Glossier, its own non-makeup-makeup effect is achieved without those questionable production conditions (and with even wavier packaging). It’s also a first-generation, Chinese-American-founded brand that includes plenty of pressed seed oils in its products (like this gloss), as well as vitamins A and E.

The French one that’s actually worth the hype

A staple of French pharmacies. There is truly no other lip balm like Nuxe’s Rève de Miel, or “Honey Dream,” because a little bit goes a long (non-sticky) way when you spackle it on your lips before bed, or as a morning lip hydration after face-washing. There’s no overbearing scent, just a nice waxy smell, and while it’s pricier than a check-out line balm, one pot will last you months.

The one that’s probably already lost in your car 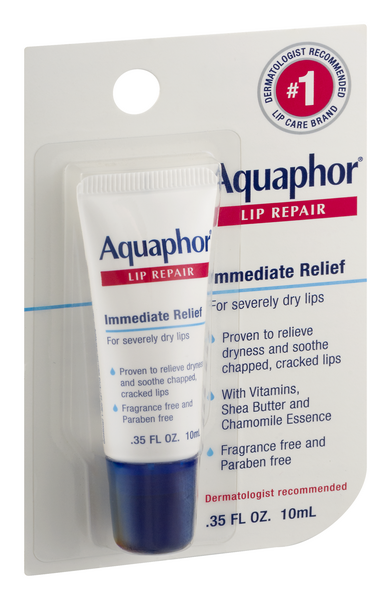 Not a faux-injector. Not at all. But a super hydrator to layer over lips (bare and otherwise). We also appreciate that it’s part of an on-going smackdown between Aquaphor and Eucerin in general (a fight for which we will always make popcorn). As far as rankings in Unpretentious Hydration, Aquaphor gets high marks; it’s fragrance-free, shea butter-based, price accessible, squirtable, and hangs out by the Slim Jims at check-out.

At first, you don’t expect Ciate’s matte primer to give you plumper looking lips: As you brush it on, your lips turn kind of dry and white-ish. But you’re laying the foundation for a bigger pout, and the perfect canvas for a bright lipstick. Primer, in the truest sense.

And remember, folks: It wouldn’t be worth it to have to explain to your loved ones that you lost your lips in a tragic DIY-injection accident.

Your faithful VICE editors independently selected all of the stuff featured in this story. We may receive a small commission if you buy through the links on our site.