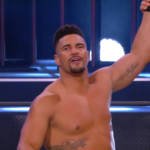 In an interview with The Independent, AEW wrestler Anthony Ogogo revealed that he was close to committing suicide back in 2019 after his career-ending eye injury. He suffered a fractured eye socket in a boxing match and was left legally blind as a result. Here are highlights:

On what turned his thinking around: “My best friend, during the Covid lockdown, he died from bladder cancer. He had a really horrible nine-month battle with this cancer and it took him, 30 years old with a beautiful kid, a lovely young man. So funny, so vibrant. It took that to happen for me to go ‘f***ing hell, yes I’ve a little bit of bad luck but I’m still alive’. I could still do things I want to do. There are things I want to enjoy and, as cheesy as it sounds, it gave a second lease on life.”

On hoping to add legitimacy to wrestling: “If people see this guy who won a medal in boxing at London 2012 they think ‘there’s got to be something to it’. It’s the lack of respect that we get from the outside world that is the frustrating bit because it’s a really, really, really, hard sport but I think I do add some legitimacy to it. When tough guys like me say it hurts to take a bump, people realise wrestling is a serious industry.”