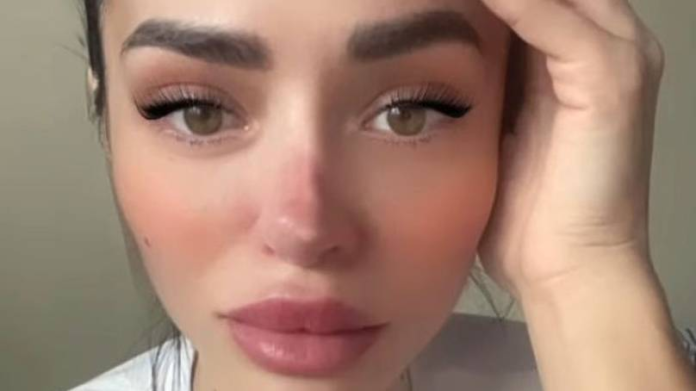 A Russian reality star has begged for help after a botched nose job has left her with just ‘one or two months’ until her nose decays completely.

Anastasia Balinskaya shared shocking images of her nose on Instagram where she pleaded with her 163,000 followers to help her raise enough money to get medical intervention to save her nose.

The 29-year-old also urged people to think twice before going under the knife, warning ‘you can’t use plastic surgery to boost your self-esteem’.

Balinskaya, who starred in Russian reality show House-2, underwent the cosmetic procedure several years ago, but said her nose had swelled up massively before it began to rot away from the inside.

The influencer said the reaction was caused by an implant in her nose and has slammed the surgeon who carried out the operation for the poor-quality work and aftercare.

Over the years, Balinskaya, has had several unsuccessful attempts to correct the procedure, and has now been prescribed antibiotics and nasal drops to help with the inflammation.

However, the medication isn’t enough and she’s now in a race against time to save her nose.

Balinskaya said: “The doctor told me that I had a month, a maximum of two, until everything decayed.”

Posting about her plight earlier this month, she wrote: “Victim of plastic surgery? Yes! I curse the day I went under the surgeon’s knife for the first time!

“If you are a girl and are reading this post, I beg you to understand what I did not understand before. You can’t use plastic surgery to boost your self-esteem. You will never achieve the desired result!

“For five years, I have already had three operations on my nose and with each op, it is getting worse and worse. I’m not chasing beauty right now, I just want a breathable, flat nose.

“After the last operation, my bone split and the bridge of my nose looked like I had been beaten in the ring.

“Yesterday I went to the doctor and found out that the artificial implant that was inserted into the tip of my nose did not take root, my body rejected it, the cartilage has come out in one nostril, there is inflammation, and my nose is rotting.

“I need an operation urgently, I have a maximum of one to two months.

“I cannot afford it, if you want to help me, I will leave my bank number in this post.

“Even if everyone translates 5p, you can help me save my nose.

“I have never asked or accepted help from anyone, but now I simply don’t have anyone to turn to for help.”