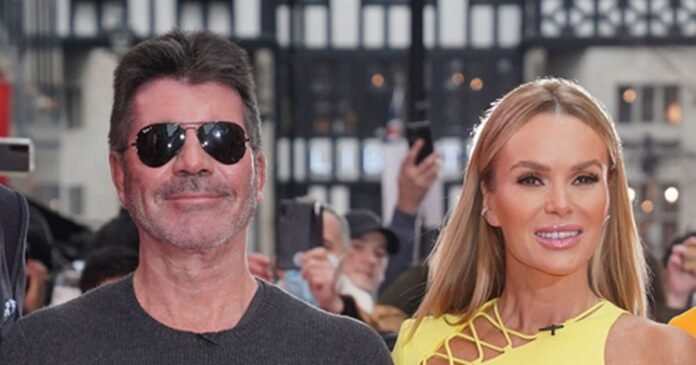 Amanda Holden was shimmering in a silver swimsuit as she celebrated Easter with Simon Cowell and his fiancée Lauren Silverman Stateside.

The glammed-up Britain’s Got Talent judge, 51, shared the playful snaps with her 1.7 million Instagram followers as she soaked up the sun in California.

She thanked music mogul Simon and his wife-to-be for hosting the bash at their incredible mansion and they weren’t the only ones invited to spend some time in America with them.

Ayda Field Williams and Terri Seymour joined the party as the families got together to enjoy some food and of course an easter egg hunt.

Fun-loving Amanda had more fun than the kids, it appears.

Waving around a pink throw, she had a dance on the sunbed and put on a show on social media, looking sensational as she flaunted her incredible figure in her sizzling swimsuit.

With blue skies and palm trees behind her, it’s no surprise she was beaming as she enjoyed the get-away.

Hopefully Amanda managed to keep Simon and Lauren away from social media over the weekend.

The telly boss’ changing face left Britain’s Got Talent fans concerned as they tuned in for the launch show.

Amanda gave a special mention to Alesha Dixon, and David Walliams on Instagram
(

The ITV talent show is back for the latest series after it was forced off air for two years – and Simon made a welcome return to the panel.

But taking to Twitter, fans noted his new appearance after Simon confessed he had “gone a bit far” with his fillers over the years.

A second added: “Simon Cowell looks different but I can’t put my finger on it, has he had some work done?! #BGT,” as a third wrote: “What’s wrong with Simon Cowells face? #BGT.”

Simon recently admitted he decided to stop his Botox injections after son Eric was left in hysterics by his appearance.

He said: “There was a phase where everyone was having their faces pumped full of this and the other.

“I saw a picture of me from “before” the other day, and didn’t recognise it as me first of all.

“Eric was in hysterics. Enough was enough. There is no filler in my face at all now. Zero.”