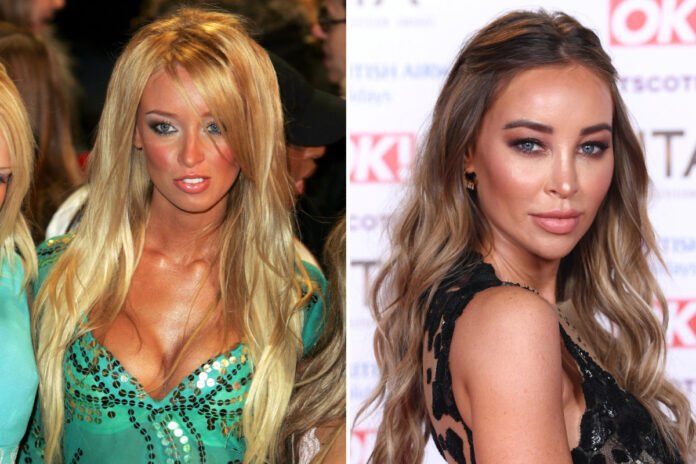 IT has been a whopping 10 years since The Only Way Is Essex first hit our television screens.

As well as giving us a heap of catchphrases (‘Well jel!’) the tanned wannabes have since gone striking makeovers after hitting the limelight.

Towie original Lauren Goodger recently spoke about how far the first stars have come on Robert Hisee’s The MindKite podcast – and slammed new cast members for having “too much work done”.

She said: “It was so much more innocent and genuine. Now, you’ve got these 19-year-olds – they’ve had so much work done.

“We didn’t – we came on and did our own make up. They’ve got hair and makeup, stylists, extensions… we were real, no extensions no nothing. It was what it was.”

But many of her own gang have now had work done too, as these before and afters of the original cast show…

In 2016, Ferne McCann revealed the results of her secret nose job live on This Morning.

The stunning star underwent surgery after years of battling both cruel taunts from Twitter trolls and her own insecurities.

Showing off her new nose, she revealed: “It is subtle and I wanted it to be subtle.

She said in 2018: “I want another nose job – I’ve never told anybody that before. I would love another one.

“I want a boob job too. I want natural boobs. Mine are so saggy now after breast-feeding my baby. I don’t like big, fake boobs – they look so tacky.”

Arg took to Instagram in October 2017 to give fans a look at his new nose and thanked his surgeon for improving his “overall confidence and self-esteem”.

The star exclusively told The Sun Online that he decided to go under the knife after his dramatic four stone has left him feeling like his nose was “too big.”

James said that after losing in a Thai rehab that year, his nose looked more “prominent”, and left him particularly self-conscious about a bump and large nostrils.

Arg said: “At school my nickname was always ‘Nostrils’ because my nostrils are huge – I’ve literally never seen anyone with bigger nostrils than me!”

Chloe has previously opened up about her surgery regrets, especially her two boob jobs.

She told The Sun: “My boobs are a bit of a regret. They’re like 1990’s perky ones, instead of the more natural-looking boobs you see now.”

Chloe also showed off the results of a Brazilian bum lift, after flying out to Marbella for the procedure in 2018.

The star said it was in a bid to boost her flagging confidence, after previously branding her behind as a “flat granny bum.”

It’s the second time Chloe has undergone this procedure, previously having had a £4,500 bum lift in 2012.

The Essex star has also admitted in the past she has had work done to her face, saying: “I had collagen in my lips and they were ridiculous, so I’ve never had that done again.

“Now I stick to Botox and fillers.”

While she may not approve of “work” had by Towie newbies, Lauren Goodger has had some tweaks over the years.

Lauren spent £4,000 on a new nose in 2011 to get rid of a prominent bump caused by her nephew hitting her in the face with a toy fire engine.

She said of her new profile: “I do feel prettier and sexier. I can’t wait to go out and show off my new look.

“On TV, from certain angles, my nose would look really awful and the more I watched the shows, the more of a complex I would get about my appearance.”

She has also admitted to getting her boobs done, having Botox, tweaking her lips, having lipo on her waist and having jaw fillers.

Mario had a £5,000 rhinoplasty procedure in 2016, conducted by celebrity surgeon Dr Riccardo Frati, in London.

He told The Sun how he had decided to go under the knife after being bullied by some of his co-stars.

Mario explained: “I broke my nose playing football when I was 11.

“It didn’t bother me until five years ago when Arg and Diags picked on me about how big it was live on Towie.

“I’m proud of my Italian heritage – our nose is supposed to be a striking feature, like David Gandy.

“But everyone jumped on the bandwagon and I was bullied on social media for years, with people setting up Twitter accounts dedicated to slagging off my nose.”

Lauren Pope has also had some tweaks in her time, but has tried to favour a more natural look lately.

In 2017, decided to get her E cup implants taken out because she was sick of looking “trashy”.

Lauren had two breast enlargement surgeries before her reduction and she documented the second boob job during an episode of Towie.

The DJ was one of 40,000 women affected by the faulty French Poly Implant Prothese (PIP) when she initially had her boob job.

During the process of removing the implants, she decided to replace the items with a larger size before getting the recent reduction.

She also spoke to Heat magazine about a nose job she had, saying: “I wanted the tip of mine shaped as well. But it was so weak, where I’ve had work before, the surgeon said I’d run a risk of it collapsing.”

Meanwhile Charlotte Crosby admits she wishes she’d LIED about having plastic surgery after being branded ‘moody and prickly’ for refusing to talk about it.

Here are the most extreme plastic surgery addicts in the world – from a woman with a 30J chest to another with a 6ft BUM.