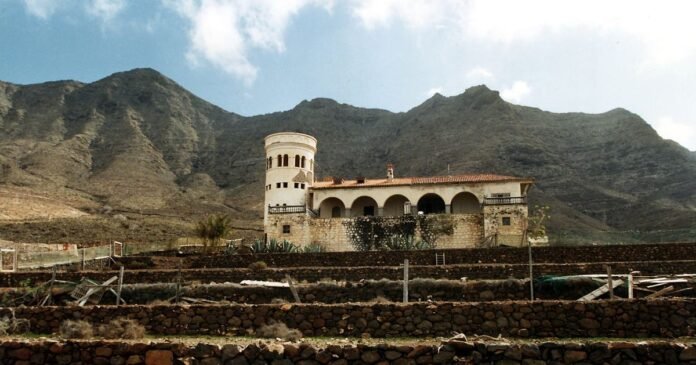 A creepy Canary Islands villa rumoured to be where Adolf Hitler got plastic surgery at the end of World War Two was used by Nazis, its resident has claimed.

Many believe a myth that high-ranking Nazis Martin Bormann, Josef Mengele and Hitler faked their deaths and got facial reconstructive surgery at Casa Winter in Fuerteventura, before taking refuge in South America.

The eerie hideaway is also rumoured to have been used to help coordinate deadly U-boat attacks on allied ships in the Atlantic Ocean, the Sun reports.

It has a white-tiled room which looks just like an operating theatre which could have been used for plastic surgery, according to current resident Pedro Fumero.

He told documentary makers for the show “Secret Nazi Bases”, now being screened on Yesterday, how his relatives helped build the castle-like coastal villa.

Fumero said: “They used to tell me stories of military men arriving.”

He believes caves beneath the vast building – which has more than six feet thick basement walls – once housed Nazi subs.

The mysterious property was built by Gustav Winter, a German engineer who made his fortune building power plants in Argentina and elsewhere around the world.

Citing wartime reports and some of his own findings, Fumero said: “I am sure Gustav Winter was provisioning German submarines.

“Why would you build a tower like this on top of what is essentially a bunker? This was never a house meant for enjoyment.”

Locals were reportedly banned from going near the site after it was declared a “military zone” in a deal struck between Hitler and Spanish dictator General Franco.

Winter denied the dark claims about the villa right up until his death and in an interview with the German magazine Stern in 1971 insisted it wasn’t finished being built until after the war.

But some still believe a number of notorious Nazis arrived on the island to have plastic surgery after the fall of the Third Reich before heading to Brazil and Argentina.

But historian Alex Peer told Sun Online that Winter was “not a spy, he was an engineer”.

He said: “This place has an extremely special spirit. There is a strange energy surrounding the villa.

“However, many of the rumours surrounding the home are just not true.”

Historians say Hitler died when he shot himself as the allies closed in around him in 1945.