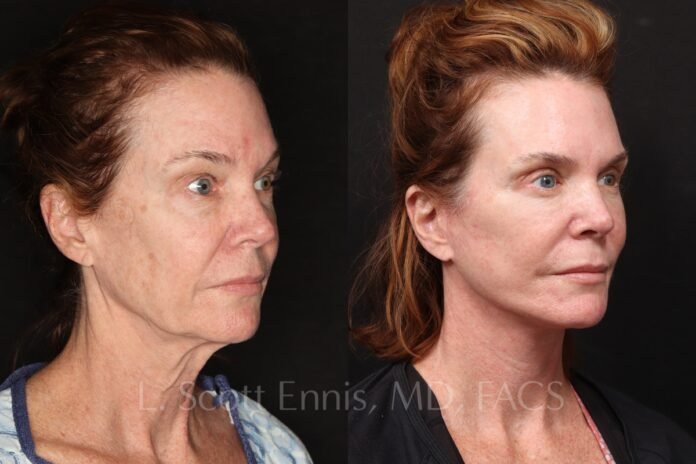 If you’ve ever considered plastic surgery as the answer to achieving a youthful look, you’ve probably heard of the deep plane facelift, which has revolutionized the results of facial surgery. However, many patients are still concerned with a visible scar, especially behind the ear. Many women say they have seen a scar behind a friend’s ear when their hair is up, or while swimming, and say it was “sooo noticeable!” Being an artist, Dr. Ennis has always been very conscientious of this, and has always tucked the scar way up behind the ear and into the hairline. This way it is not visible, even when your hair is up in a ponytail, hence the “ponytail facelift.”

Actual Patient Before & After

Between the deep plane facelift and the ponytail scar, the effects can be dramatic, long lasting, and won’t affect your ability to put your hair up! This effective approach emerged after decades of superficial facelifts that left much to be desired. Over the years, plastic surgeons have learned that the key to achieving a long-lasting, natural facelift requires looking beyond the surface.

Early facial surgeries performed in the 1970s, ’80s, and ’90s focused on the skin only, relying on a rather simple procedure. First, an incision was made around the back of the ear; next, the skin was pulled taught; finally, the surgeon stitched the opening closed. While the initial results were impressive, patients found themselves returning every four or five years, or sooner, to have the skin “retightened.” This wasn’t entirely surprising since the skin, being very elastic, takes the shape of whatever is underneath it.

Accordingly, as muscles and ligaments relax with age, the skin follows, creating a tired look. After several “tightenings,” horizontal lines would begin developing across the face. As would be expected, a skin only facelift created more problems than it solved and needed to be improved.

Fortunately, facelifts took a turn for the better in the early 2000s. Plastic surgeons realized that tightening the muscles and ligaments of the face, along with the skin, was a more thorough approach that would significantly reduce the need for frequent “touch ups.” This is when SMAS (superficial musculoaponeurotic system) facelifts emerged as a notable advancement in facial surgery. However, while this procedure nicely tightened the jaw line and avoided the over-pulled look, it did very little for the nasolabial folds and marionette lines found around the sides of the nose and mouth.

In an attempt to improve the end result and offer patients a lasting and naturally youthful look, the deep plane facelift was developed. This technique requires an expert plastic surgeon with deep knowledge of facial anatomy and significant hands-on experience. The procedure includes several steps, beginning, as all facelifts do, with an incision behind the ear. Next, the layer of tissue beneath the muscle is elevated. The muscles are then individually tightened, correcting the marionette lines and nasolabial folds and significantly improving the appearance of the jaw line.

“Performing a deep plane facelift with the ponytail scar has allowed us to achieve remarkable results,” states Dr. Ennis.

Botched celebrity makeovers may have left you feeling uncertain about plastic surgery, but choosing the right procedure and an experienced surgeon can get you the look you’ve been dreaming about.

Putting Your Face In Good Hands

Choosing the right plastic surgeon ensures a seamless experience that starts with your initial consultation and ends with the results you’ve always dreamed about. At Ennis Plastic Surgery, Dr. L. Scott Ennis and his team make every patient a priority, and will take as much time as needed to understand your needs and expectations. Dr. Ennis has been named one of America’s Top Plastic Surgeons and one of the Ten Best Plastic Surgeons in Florida based on patient reviews, and is an accomplished artist recognized by the United States Congress, so you can trust that you’ll receive the highest quality care and the best possible outcome.

Email [email protected] or call 561/266-4439 to book your in-person or virtual consult at Ennis Plastic Surgery in Boca Raton, FL.