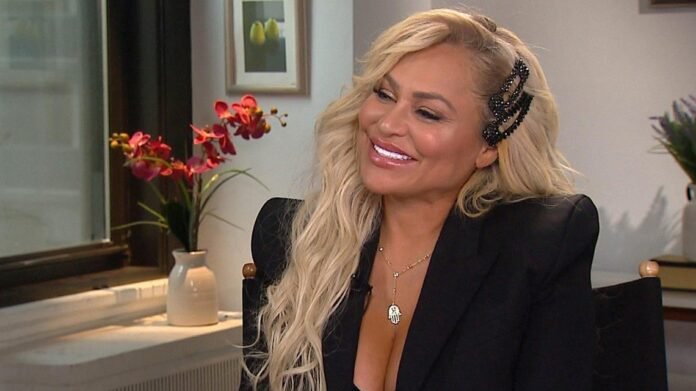 Darcey Silva is spilling the tea on her exes. The 90 Day Fiancé star appeared on Sunday’s 90 Day Bares All and touched on her exes Jesse Meester and Tom Brooks. Darcey is currently engaged to Georgi Rusev.

“I can’t believe I put myself through that craziness,” Darcey told host Shaun Robinson, before saying, “I should’ve realized [Tom] really wasn’t into it.”

While reflecting on her past relationships, she revealed that she believes Jesse once got her a used robe. “He liked his robes, I don’t know. I remember he had a few of them. Short silky ones, he kind of gifted me a robe, but it felt like it was used,” she said. “Yeah, it was like a pink, fuzzy robe and it had a hole under the arm…It seemed like someone else wore it before.”

As for Tom, she said he always “wanted to be the pretty one in the relationship.”

“Smell good, try to look good. I think he started to get some botox after we broke up,” she said of Tom, before being shown a never-before-seen clip of him manscaping. “Was he doing that to make it look bigger? I don’t know. I’m glad Georgi is all clean and don’t have to worry about that hair.”

When asked if Georgi watched any episode of Darcey with her former beaus, she revealed that Jesse and Tom’s names are “banned” from their home. As for her relationship with Georgi, Shaun did bring up that her lover is still technically married.

“I knew that he was going through the separation before the shut down so it was a waiting process,” Darcey said. “I’m always going to be there to support him. I mean, I was married and divorced, so I understand the situation and I knew he was ready to move on. It was just a matter of time.”

During the episode, Darcey also teased that season 2 of Darcey & Stacey is “going to be amazing.”

“You’re in for a ride,” she said, before sharing a preview of her telling her friends that she and Georgi got engaged. In the clip, her friends had mixed emotions, telling her that they were happy for her but also noting that this was too fast.

“They were really shocked, but I’m always going to follow my heart and I’m happy with the decision that I made for me,” Darcey told Shaun. “And I know they’ll always be there for me, regardless.”

Darcey opened up to ET last year about her failed relationships with Tom and Jesse.

“I learned from the past,” she said. “I learned what I don’t want. I’ll cherish the good memories but all in all, it was both, like, a toxic situation. I never expected it to happen that way but I love big and I give big and they just … were too hard to handle. I didn’t just want to be involved with someone who was kinda going to lower my worth and I knew I was going to rise above in the end.”

“I’ve definitely healed from that,” she continued. “My idea is what I choose now in my life and I’m never gonna settle for less.”

Darcey noted, “I appreciate the fans … but I just gotta follow my heart and trust and know that he will be there and love me forever the way he says he does. … I definitely feel that sincerity in him.”

See more in the video below