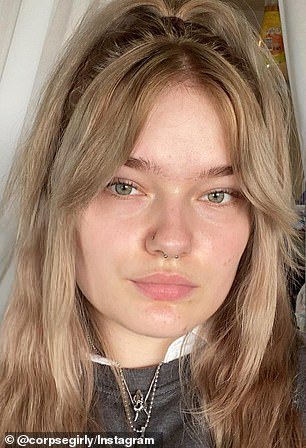 A woman has warned against Botox injections after the toxin migrated to the side of her face, leaving her with both a crooked smile and a lisp.

Nikita Kimberly, 21, from the Netherlands, shared her ‘Botox horror story’ on TikTok last fall, a few days after the cosmetic procedure. Her smile was visibly crooked, which she claimed was a result of the Botox.

‘I got Botox in my chin because I had a muscle that was that was working a bit too hard, so whenever I smiled I had a dent in my chin,’ explained Nikita, who uses the handle @corpsegirly. 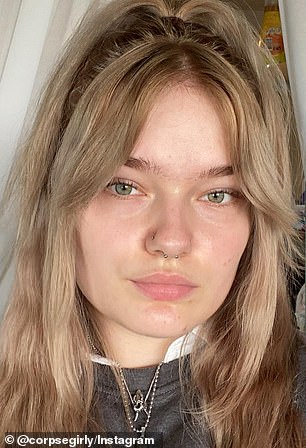 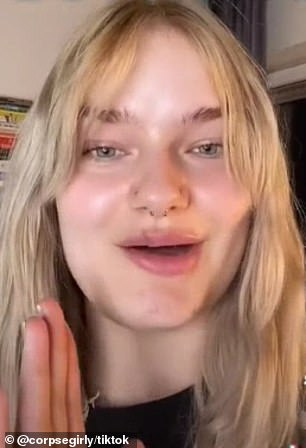 Nikita Kimberly, 21, from the Netherlands, shared her ‘Botox horror story’ on TikTok, saying she was left with a crooked smile and a lisp. She is pictured before (L) and after (R) the injections 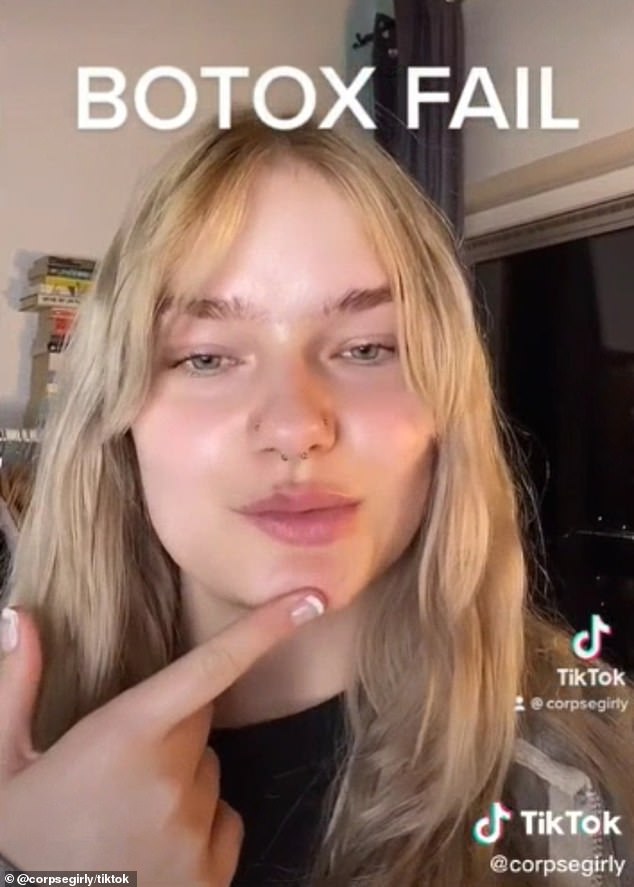 Nikita explained that she got Botox to fix a dimple in her chin, but it migrated to the side of her face and altered her facial symmetry

‘The Botox went and got into this side of my face, and as you can hear, I sometimes have a lisp now because I am biting my lip as I talk.’

Botox is the brand name of a toxin made by the bacterium Clostridium botulinum. It blocks certain signals from the nerves to the muscles and is commonly used to reduce the appearance of wrinkles.

‘As long as I don’t talk or smile with my mouth open, I look fine,’ she explained. ‘But once I smile or talk, my whole face gets crooked — and I normally didn’t have this.’ 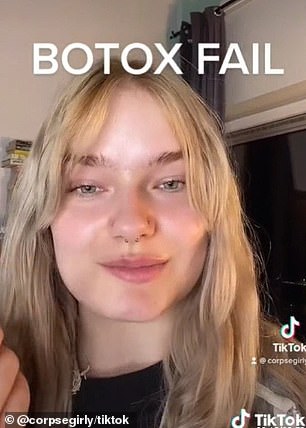 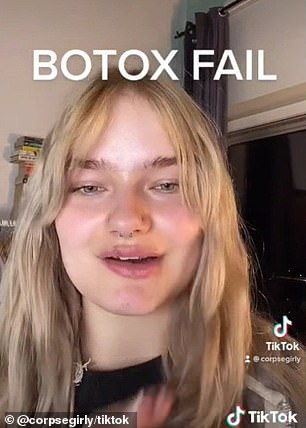 Nikita added she also had a lisp because she was biting her lip when she talked. At the end of the video, she warned against getting Botox 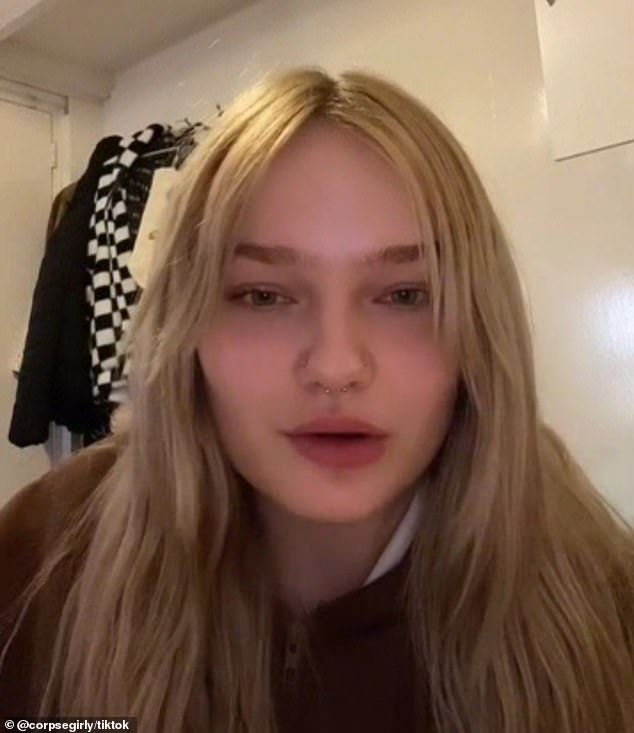 Three weeks later, Nikita posted an update about her crooked smile, saying she was starting to see some improvement

She added that her ‘smile used to be kind of symmetrical’ before she issued her warning about Botox.

Botox’s paralyzing effects last anywhere from three to six months, and one commenter assured her the side-effect would go away.

‘It will dissolve don’t worry!!’ the person wrote, while another added: ‘It’s the injector’s fault. Make sure you do your research. Been getting it for years and never had a problem.

‘Not me freaking out because I got this today,’ someone else shared.

Three weeks later, Nikita posted an update about both her lip fillers and her crooked smile, saying she was starting to see some improvement. 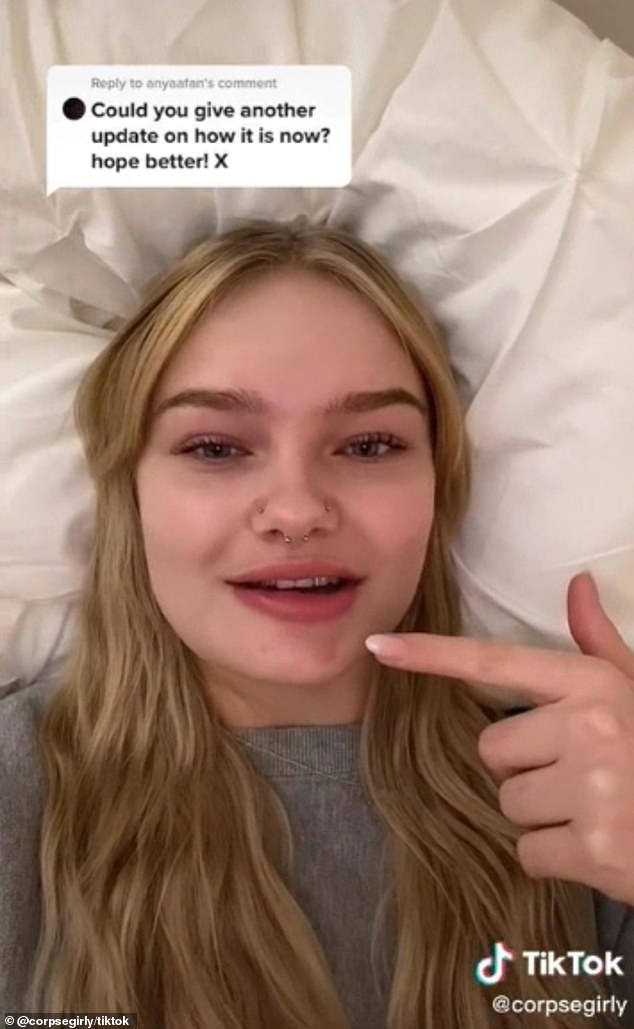 Nikita posted her most recent update in late December, three months after she got Botox, saying she doesn’t ‘get bothered by it anymore’ 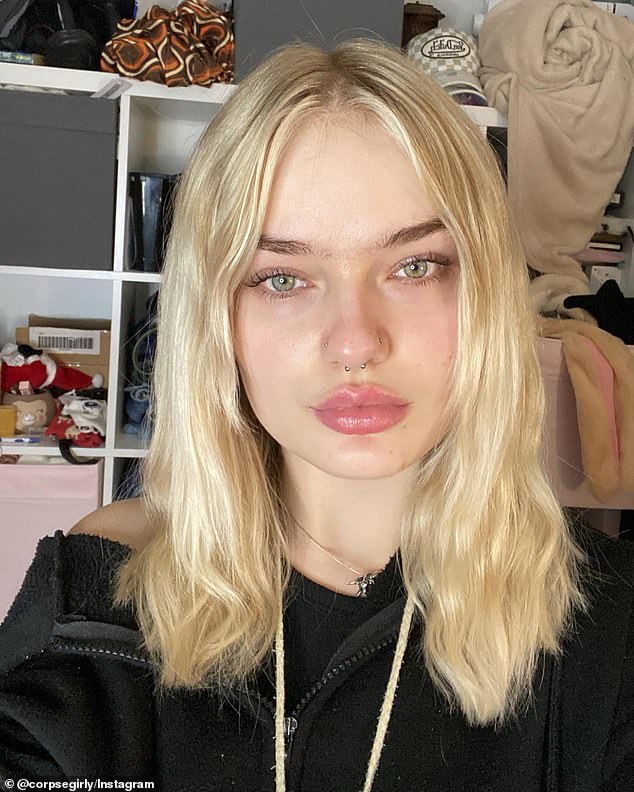 Botox only lasts three to six months, and her smile looked like it was back to normal in her recent social media photos. She is pictured in January

‘My lips are looking pretty OK, like they’ve gone down quite a bit, but I think they’re cute,’ she said. ‘My lip is still a bit crooked, just a bit — quite a bit — but a lot less than it used to be.’

She noted the ‘most important’ thing was that Botox is not permanent, and the effects will eventually go away.

Nikita posted her most recent update in late December, three months after she got Botox, saying she doesn’t ‘get bothered by it anymore.’

‘As you can see, it’s not as bad as it used to be. It’s still a bit crooked, mostly when I relax my mouth when it’s open or when I talk quite outrageously, like with a lot of emotion,’ she explained. ‘Otherwise, it’s not that noticeable.’

At the time, Nikita hoped it would be completely dissolved in a month or two. In recent Instagram photos, her smile appears to be back to normal.