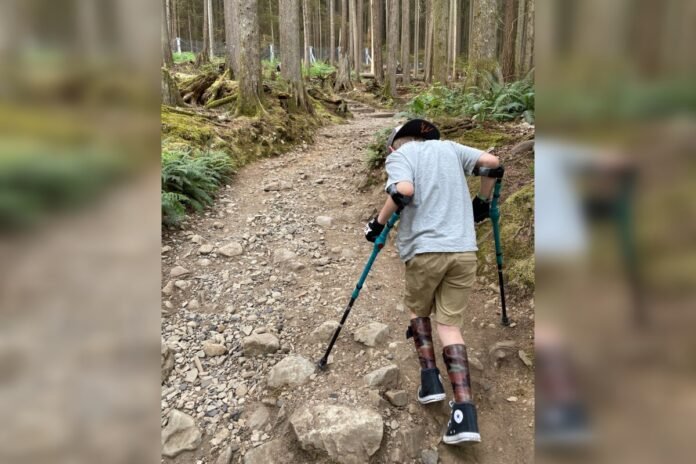 It took him 11 hours. At the three-quarter mark, he felt like he couldn’t take another step.

But Richie Grimes made it all the way up the Grouse Grind, despite the lack of mobility in his lower body caused by spastic diplegia cerebral palsy.

His Dad, Richard Grimes, said their family has a motto for everything they do.

“Get back up again,” he said. “Richie does fall over a lot, whatever he’s doing – walking, skiing, mountain biking – but we always get back up again.

“I would say that covers all of the challenges he faces. He’s extremely persistent, he never gives up.”

At the top of the trail, Richie said he felt really proud of himself, acknowledging it was a hard challenge.

“I really felt honoured that my friends had done this with me, even my cousins who live on Vancouver Island came over,” Richie said. His grandparents did the hike too.

The North Vancouver boy, who’s now 11 years old, made the climb last year ahead of his birthday on July 23.

Richie is sharing his triumph ahead of this year’s BC Children’s Hospital Dream Lottery, with proceeds going to research and specialized pediatric care.

Richie has had multiple surgeries and gets botox injections to treat the chronic stiffness caused by his condition. All of that happens through BC Children’s Hospital.

He also has his gait assessed at the motion lab, a joint project between the hospital and adjacent Sunny Hill Health Centre.

Richie continues to make gains in his active life, which he said helps him to be stronger.

This weekend, he’s heading up to Whistler for Crankworx mountain bike festival, and to do some off-road cycling of his own. Next year, Richie said he plans to ride in the festival’s adaptive race.

He’s also working on being able to ski independently. His dad said they’re going to try some backcountry skiing routes when he’s able.

And on his 13th birthday, Richie wants to hike the Grind again and beat his record of 11 hours (and three minutes).